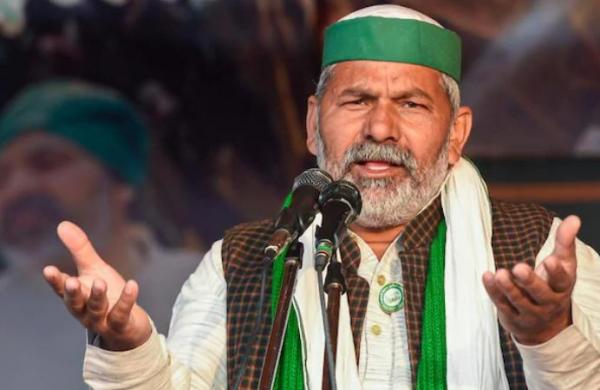 By PTI
NEW DELHI: Villagers brought water in clay pots and home-made food for Bharatiya Kisan Union leader Rakesh Tikait on Saturday in a show of support for the ongoing stir against the new farm laws, even as local authorities sent tankers of drinking water and mobile toilets at the protest site.

Tikait urged the government to restore internet services, which have been banned by the Centre at protest sites on Delhi’s borders Saturday.

A little boy from a Ghaziabad village reached the protest with a tiffin filled with homemade ‘parathas’ and pickle along with water.

Some villagers from western Uttar Pradesh including places like Muzaffarnagar, Greater Noida, and Meerut also reached Ghazipur border with water and buttermilk in clay pots to feed the protestors.

Water and power supply at the protest site was disrupted by the local administration two days ago following an ultimatum to protestors to vacate the spot by Thursday night, prompting Tikait to say he would drink water only when farmers bring it from their villages but continue the stir.

Overwhelmed by emotion, tears welled up the eyes of Tikait, who had proclaimed he would rather commit suicide than end the protest for farmers.

“A conspiracy is being planned by the BJP to weaken the agitation of farmers,” Tikait claimed, a day after a BKU member filed a complaint at Kashambi police station here against two BJP MLAs for allegedly orchestrating violence at the protest site.

A senior police official confirmed to PTI that the complaint was made against Loni MLA Nand Kishor Gujjar and Sahibabad MLA Sunil Sharma but FIR has not been lodged.

Tikait also urged the Centre to restore internet services at protest sites so that farmers could put forth their views and demands on social media.

Besides sending water tankers, the Ghaziabad civic bodies have also re-stationed mobile toilets at the protest site on Saturday, as support for the farmers’ protest swelled with more villagers pouring in at the Delhi- Meerut highway in Ghazipur on the border with Uttar Pradesh.

The Bharatiya Kisan Union-led protest against the Centre’s new farm laws here looked like it was going slim on Thursday but more protestors have joined the stir, following a mahapanchayat of farmers on Saturday in Muzaffarnagar, while supporters also joined in from Haryana and Rajasthan districts.

Khatana, who is at the demonstration site with BKU leader Rakesh Tikait, said there has been continuous support for the “peaceful protest” against the farmers’ demand for removal of the new agri laws.

“This is not a political protest. Anybody who shares the ideology of the BKU and Rakesh Tikait are welcome here. But it is our appeal to those who do not wish to support the movement till the end that please do not come only to leave in between,” he said.

Asked about estimated crowd size at the site, the farmer leader from western Uttar Pradesh said, “Farmers are coming in to show solidarity and leaving. It is not a stagnant crowd.”

On Friday night, the BKU office-bearers had estimated a crowd of around 10,000 people at Ghazipur while the Ghaziabad police officials pegged it around 5,000 to 6,000.

Heavy security deployment, including personnel of the Provincial Armed Constabulary (PAC), Rapid Action Force (RAF) in anti-riot gears and civil police, was made at the protest site.

Meanwhile, the Delhi Traffic Police said to and fro movement on the National Highway 24 (Delhi-Meerut Expressway) has been closed.