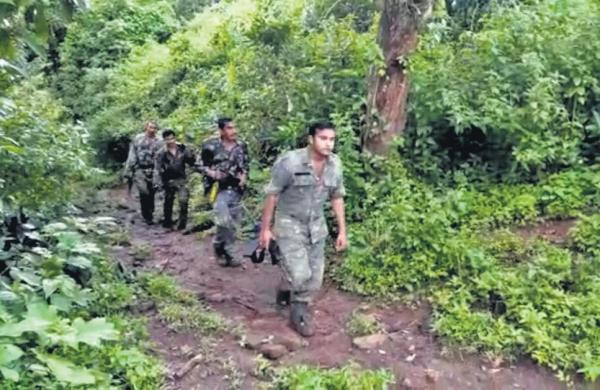 Express News Service
RANCHI: A day after a Combat Battalion for Resolute Action (CoBRA) jawan was critically injured when an IED, planted by Maoists to prevent security forces from tracing them, exploded in the jungles of Marwa in Gumla, a villager was killed in a similar incident early on Wednesday. According to police, the villager was accompanying the security forces to guide them during a search operation being conducted to locate the Maoists when he stepped on an IED and was killed.

“A villager, Rameshwar Munda, got injured in the IED blast and was evacuated immediately from there, but succumbed to his injuries before he was taken to a doctor. Being a local, he was taken along by the security forces to guide them in the dense forests,” said Gumla SP Hurdeep P Janardhanan.

The squads of Maoist Zonal Commander Budheshwar Oraon and Ravindra Ganjhu have planted several IEDs in the Marwa jungles of Gumla and these often blow up when security forces are on search operations or when villagers go into the jungles to graze their animals.

This is the sixth such incident of a landmine blast within a year in the Marwa jungles.

In February this year, a CRPF jawan had lost both his legs in a similar blast while a villager Mahender Mahto also got seriously injured in another IED blast that occurred in the Marwa Karagani jungles under Kurumgarh police station in Gumla.

According to villagers, they have been warned by the Maoists not to enter the jungles as the land mines planted by them might explode claiming their lives or they may get critically injured. As per the message given to the villagers, the Maoists have planted hundreds of landmines in the jungles of Gumla to prevent the entry of security forces.

“The message was spread among the people in more than 40 small and big villages under Kurumgarh police station warning us to enter the jungles at our own risk as they have planted landmines there. Since then, we have not entered the jungles,” said a villager Budhan Munda. But it is very difficult to survive without the jungles as most of the day to day activities of the villagers are dependent on it, he added.