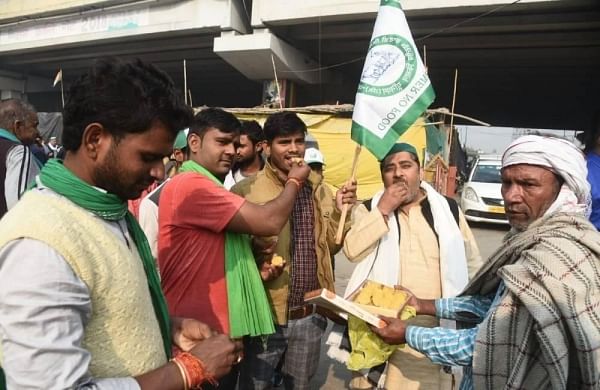 It also said that the SKM will take note of all developments and will hold its meeting soon and announce further decisions if any.

“Samyukt Kisan Morcha welcomes this decision and will wait for the announcement to take effect through due parliamentary procedures,” the SKM said in a statement.

“The agitation of farmers is not just against the repeal of the three black laws, but also for a statutory guarantee to remunerative prices for all agricultural produce and for all farmers. This important demand of farmers is still pending,” it said.

In his address to the nation on the occasion of Guru Nanak Jayanti, Modi said the three farm laws will be repealed in the coming Winter session of Parliament.

Thousands of farmers from Punjab, Haryana and Uttar Pradesh under the aegis of various farmers unions have been protesting at the borders of the national capital since November 26 last year to demand repeal of the three farm laws.

Senior Congress leader P Chidambaram on Friday took a dig at the government, saying that the move was not inspired by a change of heart but impelled by “fear of elections”.

The PM’s announcement on the withdrawal of the three farm laws is not inspired by a change of policy or a change of heart.

It is impelled by “fear of elections”, the Congress leader charged in a series of tweets.

“Anyway, it is a great victory for the farmers and for the Congress party which was unwavering in its opposition to the farm laws,” Chidambaram said.

Delhi Chief Minister Arvind Kejriwal on Friday welcomed the government’s announcement to repeal the contentious farm laws, saying the “sacrifice” of farmers who died protesting against them will remain immortal.

“Such a happy news has been received on Prakash Diwas. The three laws scrapped. More than 700 farmers martyred. Their sacrifice will remain immortal. The coming generations will remember how the farmers of the country saved farming and the farmers by risking their own lives. My tribute to farmers of my country,” Kejriwal tweeted in Hindi.

the Shiv Sena and the NCP, which share power in Maharashtra, on Friday said the government had to finally bow down before the agitating farmers.

Reacting to the development, Shiv Sena leader Sanjay Raut said, “For the first time the ‘mann ki baat’ of people has come out PM Modi’s mouth.

BJP leaders were openly calling these farmers Khalistanis and Pakistanis, but the Union government had to bend before the farmers’ pressure.”

“More than 400 farmers lost their lives during the protests on the borders of Delhi. Had Modi listened to our demands, many lives would have been saved. But the government was adamant and refused to listen to the farmers’ issues,” the Sena MP added.

Nawab Malik, chief spokesperson of the NCP said in a tweet, “Jhukati hai duniya, jhukane wala chahiye. We salute all the farmers, many of them gave their life. The three farm laws have been withdrawn.”

West Bengal Chief Minister Mamata Banerjee on Friday congratulated farmers for their relentless fight against three farm laws and said they were not fazed by the “cruelty” of the BJP.

“My heartfelt congratulations to every single farmer who fought relentlessly and were not fazed by the cruelty with which @BJP4India treated you. This is YOUR VICTORY! My deepest condolences to everyone who lost their loved ones in this fight.#FarmLaws,” Banerjee tweeted.

Rajasthan Chief Minister Ashok Gehlot on Friday said that the announcement of repealing the three farm laws is a victory of democracy and “defeat” of the arrogance of the Centre.

He also said that it is a victory of the patience of farmers who kept agitating for the last one year.

“The announcement of repealing all three black agricultural laws is a victory of democracy and defeat of the arrogance of the Modi government. This is a victory of the patience of the farmers who have been agitating for the last one year. The country can never forget that hundreds of farmers have lost their lives due to the short-sightedness and pride of the Modi government,” Gehlot tweeted.

“I bow to all the farmers who sacrificed their lives in the farmers’ movement. This is the victory of their sacrifice,” he said.

“A defining moment in history and a historic victory of farmers on Gurupurab,” Badal said in a statement.

Talking about the laws, Badal said, “It was for the first time in the history of democratic governments that brazen and cruel laws were made without even taking the stakeholders on board.’ “No govt should ever do such an insensitive and cruel thing again,” he asserted.

Describing “700 farmers who died during the protest as martyrs”, Badal said, “The loss of these brave soldiers and the disgraceful and entirely avoidable events like the one at Lakhimpur will always remain a dark blot on the face of this government.”

Eight people including four farmers were killed in the violence in Uttar Pradesh’s Lakhimpur on October 3.

Chhattisgarh Chief Minister Bhupesh Baghel on Friday congratulated farmers for “pressuring” the Centre to withdraw the three contentious farm laws, and described the government’s announcement as a victory not only of farmers, but also of democracy over injustice.

“The Gandhian movement has once again shown its strength. Congratulations to the farmers of the country for pressuring the Central government to withdraw the three black laws. This is the victory of not only farmers, but also of democracy against injustice,” Baghel tweeted in Hindi.