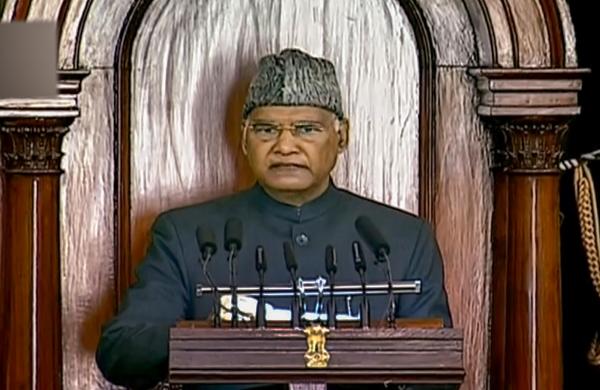 By PTI
NEW DELHI: President Ram Nath Kovind on Thursday strongly defended the three contentious agri laws that have sparked intense protests from a section of farmers, and slammed as “‘very unfortunate” the violence during the farmers’ tractor parade on Republic Day.

In his customary address to the joining sitting of Parliament on the first day of the Budget session, Kovind said the “insult” to the tricolour and Republic Day during the January 26 protests was “very unfortunate”.

If the Constitution gives us the right to freedom of expression, it also reaches us to take laws and rules seriously, he said in his address that was boycotted by over 20 opposition parties in support of the demand of protesting farmers that the three laws be repealed.

He said the three agricultural bills (now laws) were passed in Parliament seven months ago, after “extensive deliberations”.

Kovind, in his address to a joint sitting of the two Houses of Parliament, said the government had decided to give minimum support price (MSP) one-and-a-half times more than the cost, following the recommendations of Swaminathan Commission.

“In the last six years, the government has attempted a positive change in every system of agriculture sector from seed to market, so that Indian agriculture can become modern and agriculture can also expand. My government had also decided to give MSP one-and-a-half times more than the cost, following the recommendations of the Swaminathan Commission. Today my government is not only purchasing record quantity on MSP but also increasing the number of procurement centres,” he said.

“These agricultural reforms started benefitting more than 10 crore small farmers immediately. Many political parties had given full support to these reforms from time to time only after realising these benefits to small farmers. At present, the implementation of these laws has been postponed by the country’s highest court. My government will respect and follow the Supreme Court’s decision in full respect,” he added.

President said his government wants to make it clear that there was no cutailment in the rights and facilities to farmers before the formation of the three farm laws, “in fact with these new agricultural reforms the government has provided new facilities and rights to farmers.”

The President said it is the need of the hour that special attention should be paid to the small and marginal farmers who have only one or two hectares of land in the agricultural sector.

“More than 80 per cent of all farmers in the country are small farmers and their number is more than 10 crore. In 2013-14, where only 42 lakh hectares of land had the facility of micro-irrigation, today more than 56 lakh hectares of additional land has been connected with micro-irrigation. Small and marginal farmers are also a priority for my government. To support such farmers in their small expenses, around Rs 1,13,000 crores have been transferred directly to their accounts, under PM-Kisan Samman Nidhi,” he said.

He also lauded the Central government for its “timely decision”, during the onging COVID-19 pandemic, “that saved the lives of lakhs of citizens” and pointed out that the number of new coronavirus cases was going down rapidly in the country.

President Kovind, in his address to a joint sitting of the two Houses of Parliament, paid tribute to those who succumbed due to the virus.

“Joint sitting of Parliament amid Corona pandemic is essential. It’s a new year, a new decade and we are also entering into the 75th year of independence. Today all MPs are present here with message and trust that however tough be the challenge neither we nor India will stop. In this fight against the pandemic, we lost many citizens. Former President Pranab Mukherjee passed away in this Corona period. Six MPs left us untimely due to COVID. I pay my tribute to all of them,” he said.

“I am satisfied that the timely decision taken by my Government saved the lives of lakhs of citizens. Today the number of new COVID cases is going down rapidly. The number of recoveries is very high,” he added.

Commenting upon the vaccination drive against COVID-19 which started on January 26, President Kovind said, “It is a matter of pride that India is running the biggest vaccination programme in the world. Both vaccines of this programme are made in India. In this crisis, India shouldered its responsibility towards mankind and provided lakhs of doses of vaccines to several nations.”

“We have seen huge benefits of the work done by my government in the last 6 years in the health sector during this corona crisis,”

President said that the facilities of Ayushman Bharat Yojana can be availed in any of the 24,000 hospitals across the nation. “The poor are getting medicines at very low costs at 7000 centres across the country, under Pradhan Mantri Bhartiya Janaushadhi Pariyojana,” he added.

Some opposition MPs were heard raising slogans in the Central Hall’s gallery.

Noting that the Supreme Court has put the implementation of the three laws on hold, Kovind said the government will respect whatever is the decision of the apex court.

In his address, the President highlights the view of the government approved by the Union Cabinet.

He also referred to the Chinese aggression on the border, and asserted that his government is vigilant and fully committed to protecting the country’s interests.

Additional forces have been deployed to safeguard India’s sovereignty, he said while paying tributes to the 20 soldiers who made supreme sacrifices in a clash with the Chinese army at the Galwan valley in eastern Ladakh in June last year.

India and China are locked in a tense military standoff in eastern Ladakh since May 5 last.