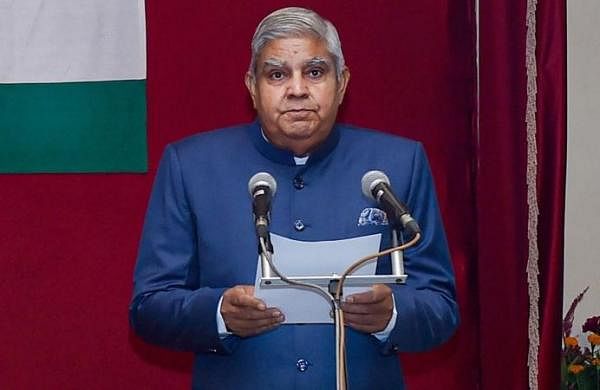 KOLKATA: West Bengal Governor Jagdeep Dhankhar on Saturday alleged that vice chancellors of 25 state universities have been appointed so far sans his nod as the chancellor.

His allegation came within 24 hours of the Mamata Banerjee administration appointing Professor Soma Bandyopadhyay as the new VC of Diamond Harbour Women’s University (DHWU) after Arts Faculty Dean Professor Tapan Mondal, appointed by Dhankhar in his capacity as the chancellor, declined to accept the post due to “personal reasons”.

The ruling Trinamool Congress, on the other hand, asserted that the governor should have approved the names of the VCs selected by the search committee, and if he refuses to give his nod, the Education Department has the power to go ahead with its decision. “Education Environ — ‘Law of ruler, not rule of law’. VCs of 24 (now 25) Universities appointed illegally without Chancellor approval,” Dhankhar tweeted.

Aug 28 Notification @MamataOfficial appointing Sonali Chakravarti CU VC for second four year term (a classic case of patronage) was directed by Chancellor on Sept 16 to be withdrawn.No response @basu_bratya “Law unto Oneself” stance.Instance of “Law of ruler, not rule of law” pic.twitter.com/1EoXnszenF
— Governor West Bengal Jagdeep Dhankhar (@jdhankhar1) January 15, 2022
Sharing a copy of a letter, dated August 17, 2021, addressed to Chief Minister Mamata Banerjee over the continuation of Professor Sonali Chakravarti Banerjee as the vice chancellor of Calcutta University for the second term, the governor tweeted, “Calcutta Univ VC Sonali Chakravarty gets second full four year term without any selection. No CM response to Aug 17 communication.”

“Aug 28 Notification @MamataOfficial appointing Sonali Chakravarti CU VC for second four year term (a classic case of patronage) was directed by Chancellor on Sept 16 to be withdrawn. No response @basu_bratya (Education Minister Bratya Basu) ‘Law unto Oneself’ stance. Instance of ‘Law of ruler, not rule of law’,” he said in another Twitter post.

“The honourable governor is not doing justice to his constitutional post by such tweets. He is meddling into the domain of the state government. As the figurehead he should have given assent to the names of VCs decided by the search committee and the Higher Education Department is vested with the power to decide the names after due consideration. If the governor refuses to give nod to the selection, the department has the power to go ahead with its decision as per law,” he said.

The state government on Friday gave additional charge to Bandyopadhyay, the vice chancellor of West Bengal University of Teachers’ Training, Education Planning and Administration (WBUTTEPA), as the VC of DHWU.

“The authority has decided to give the charge of the office of the VC of Diamond Harbour University to Prof Soma Bandyopadhyay with effect from 15.01.22 in addition to her normal duties as Vice Chancellor of WBUTTEPA,” the notification said.