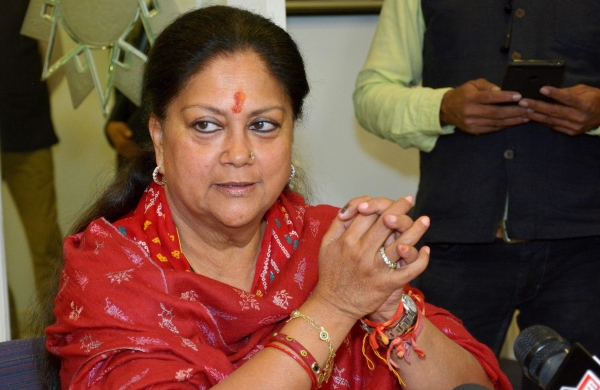 Express News Service
JAIPUR: Grappling with a deep rift within the Rajasthan unit, the BJP has appointed 93 members and 50 special invitees to the party’s state working committee. Significantly, a sizeable chunk of leaders in the new working committee is known supporters of Vasundhra Raje, which signifies that the BJP is making a special effort to placate the former Chief Minister.

Although nearly 70 of the 93 members are close to other senior leaders such as BJP Chief of the state unit, Satish Poonia, Leader of the Opposition in the Assembly Gulab Chand Kataria and his deputy leader Rajendra Singh Rathore, about 15 members are long-time Raje loyalists. In addition, among the 50 special invitees, 31 are said to be keen supporters of Raje.

BJP national office bearers, state core committee members, state office bearers and all-district presidents will be permanent invitees of the State Working Committee. Five 5 Muslim leaders and 14 women have been included in the 93-member working committee in a bid to provide “balanced representation”.

Last week, Raje had been included in the party’s high-powered core committee for the state unit. After the BJP lost the Assembly elections in Rajasthan two years ago, Raje has been marginalized and kept out of state party forums. But with BJP President JP Nadda including her in the core committee, Raje had made a clear comeback.

Sources in the BJP say that Raje still enjoys huge support among party MLAs in Rajasthan and has a strong base within the state party unit.

The BJP top brass seems to have learnt its lesson from the political crisis which erupted in Rajasthan last year during the tussle between CM Ashok Gehlot and rebel Congress leader Sachin Pilot. Raje and her supporters had not been kept in the loop and her tactical silence at that time had played a vital role in the survival of the Gehlot government. By accommodating the Raje camp adequately in the State Working Committee, the BJP hopes to check the infighting in the state unit.