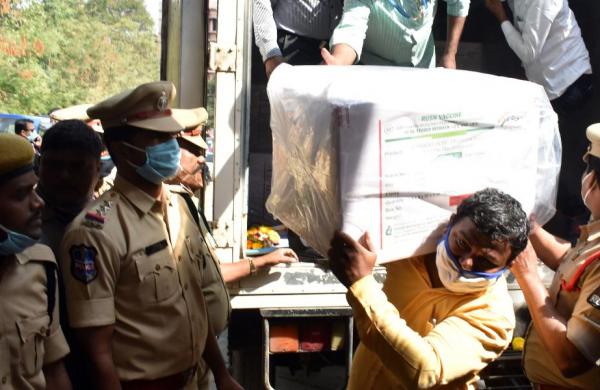 By PTI
BURDWAN: A special vehicle carrying COVID-19 vaccines got held up on Wednesday in West Bengal’s Purba Bardhaman district due to a blockade of the national highway led by state minister Siddiqullah Chowdhury, protesting against the new farm laws, sources said.

Purba Bardhaman’s Superintendent of Police Bhaskar Mukhopadhyay said that the vaccine-carrying insulated van was diverted over a distance of five km through a village owing to the blockade of the national highway, connecting Kolkata and New Delhi, at the Galsi area.

The delay in the movement of the vehicle was for the time taken to cover the five km distance through the village, he said.

Unofficial sources, however, claimed that the vehicle had to traverse village roads for a distance of 20 kms before it could be brought back to the national highway again.

The van, which was being piloted by the West Bengal Police, was on its way to Bankura and Purulia to deliver the vaccines.

After leaving the state government’s vaccine store in Kolkata, the vehicle delivered 31,500 vaccines at Purba Bardhaman district health office and was on its way to deliver the life-saving vaccines to Bankura and Purulia when its onward journey was stopped at around 10 am owing to the blockade, despite a green corridor having been arranged by the police for its smooth and fast movement, sources said.

Chowdhury, the state library services minister, said he was not aware of the movement of the vaccine van and cleared the road once it was brought to his notice that the vehicle was held up, but by that time it was already diverted.