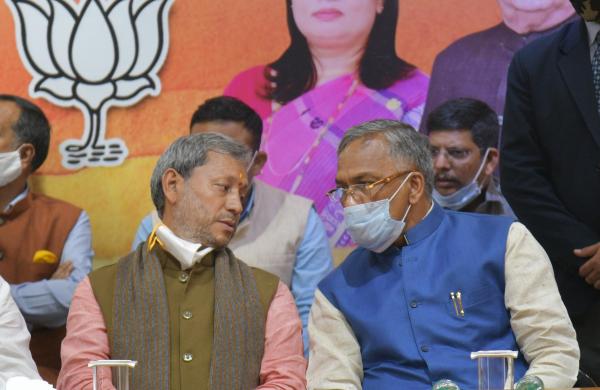 Sources in the party informed that there are three Cabinet posts up for grabs and will be filled soon. Confirming this, Dushyant Gautam, in charge of Uttrakhand said that the Cabinet expansion will take place soon.

“There would soon be a Cabinet expansion,” said Gautam when asked about the expansion of Chief Minister Tirath Singh Rawat’s Cabinet.

Amid this talk of the impending expansion, Madan Kaushik, State Minister for Urban Development, too had met Gautam on Thursday in the national Capital.

While leaders refused to divulge any further details, senior leaders in the party’s State unit informed that three more ministers can be sworn in during the expansion.

Sources stated that the state can have eleven ministers. Cabinet expansion would also mean that the party will get a chance to woo the dissidents back. More changes are in offing in-state organisation with its state executive scheduled for March 12 to March 14 in which BL Santhosh will be present on one of the days.

“There have been several leaders in the party who wanted their voices to be heard but because of the troubles with former CM Trivendra Singh Rawat, this couldn’t be done. It is a time to woo them back and make them feel belonged,” a senior party leader stated.

Trivendra Singh’s resignation had come after BJP general secretary in-charge of Uttarakhand Dushyant Kumar Gautam and former Chhattisgarh Chief Minister Dr Raman Singh, submitted a report to the BJP’s central leadership, detailing the rebellion in the state unit of the party, as per sources.

Assembly polls in the state are scheduled to take place in 2022.

The BJP had swept the elections in 2017, winning 57 seats in the 70-member Uttarakhand Assembly. Congress, on the other hand, were able to win just 11 seats.