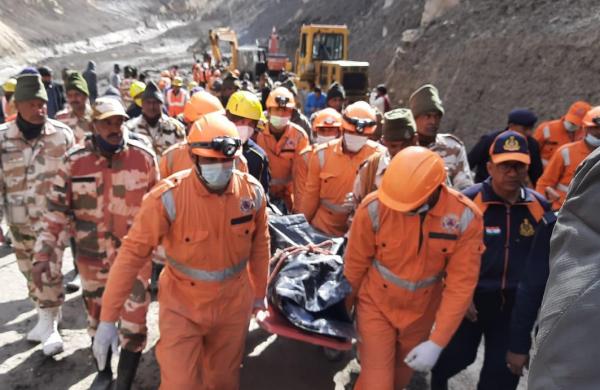 By PTI
DEHRADUN: The death toll from the Uttarakhand disaster rose to 31 with the recovery of five bodies on Tuesday, the State Emergency Operation Centre said, even as the operation to rescue around 30 workers feared trapped inside a tunnel at the Tapovan power project in Chamoli district continued.

The State Emergency Operation Centre said 175 people are still missing after the Sunday’s disaster, apparently caused by a glacier burst.

Rawat, who reached Tapovan on Monday evening to review rescue efforts, undertook an aerial survey of the affected areas on Tuesday and also met 12 workers who were rescued from the tunnel on Sunday evening.

Around half a dozen people were injured in the Sunday avalanche.

Thirteen border villages of Joshimath block were cut off following the avalanche in Rishi Ganga river on Sunday.

Nearly 100 ration kits have been supplied to the affected villages by helicopters to ensure they face no dearth of essentials.

Talking to reporters, Rawat said the priority is to get to those trapped inside the tunnel and save as many lives as possible.

Additional heavy machines could be pressed into service to expedite the process of clearing tonnes of debris inside the tunnel blocking the path of rescue personnel.

A portion of the Nanda Devi glacier possibly burst through its banks in Chamoli district on Sunday.

It appeared to have triggered an avalanche and a deluge that ripped through the Alaknanda river system in the upper reaches of the ecologically fragile Himalayas.

Experts, however, are still trying to determine the exact cause of the disaster in Joshimath.