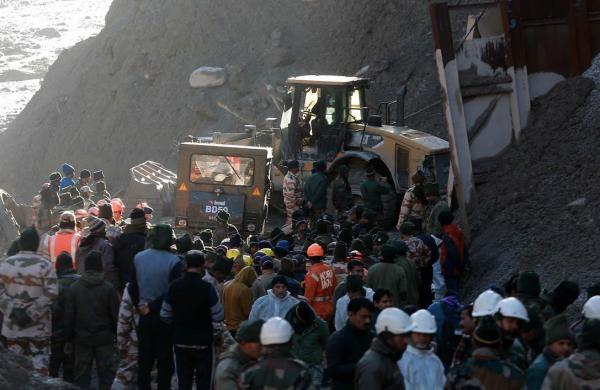 By PTI
JOSHIMATH: They had lost hope of survival when one of them found his mobile phone network working, helping them contact the authorities who rescued them from an underground tunnel at Tapovan in Uttarakhand’s Chamoli where flash floods wreaked havoc following a glacier burst.

“We heard people screaming at us to come out of the tunnel but before we could react, a sudden gush of water and heavy silt swamped upon us,” rescued Tapovan power project worker Lal Bahadur said.

He, along with 11 of his other colleagues, was rescued by the Indo-Tibetan Border Police (ITBP) from an underground tunnel in Uttarakhand’s Chamoli district on Monday evening.

According to officials, they remained stuck there for about seven hours, from around 10 am to 5 pm, till the last man was evacuated by rescuers.

The ITBP provided their recorded video accounts to the media.

They are now being treated at an ITBP hospital in Joshimath, about 25 km from the incident spot.

This is also the base of the ITBP’s Battalion No. 1, tasked with guarding the Line of Actual Control (LAC) with China that runs along the state.

“We were 300 metres deep in the tunnel when the water gushed in. We got trapped. The ITBP rescued us,” Nepal resident Basant said.

Another unidentified worker who hails from Dhak village in Chamoli and worked at the Tapovan project said as the water gushed in, the only thing they could do was to lunge onto the crown of the tunnel.

“We lost hope. But then we saw some light and felt some air to breathe. Suddenly one of us found he had network on his mobile and then he called up our general manager informing him about our situation,” the man said from the hospital bed.

Officials said the project GM subsequently informed the local authorities who requisitioned ITBP rescuers to save them.

The ITBP teams, armed with ropes, pulleys and carabiners, rappelled down a steep slope and brought out these men from the narrow snout of the tunnel on Sunday evening.

Vinod Singh Pawar, a resident of Joshimath, said they climbed up half-way inside the tunnel through the rods but got stuck as a gush of water came in.

“We are thankful to the ITBP rescuers for saving us,” he said in the video.

The border force began air-dropping food packets on Monday in at least nine villages that have been cut off due to the floods.

“Beyond the Raini bridge (which was swept away by the floods), there are nine villages and choppers are dropping food packets after picking them up from our base in Joshimath,” ITBP spokesperson Vivek Kumar Pandey said in Delhi.