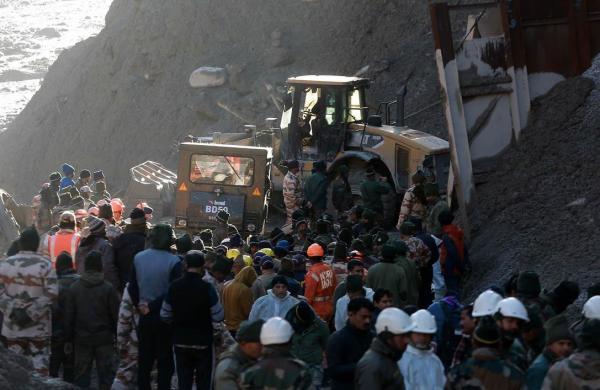 Express News Service
DEHRADUN: The joint rescue team comprising of ITBP, Indian Army, national and state disaster response force, and others is determined to save as many lives as possible. The operation to rescue 37 workers trapped in the tunnel in Tapovan of Chamoli district is underway in full swing.

The rescue team has discovered dismembered body parts amid what looks like an ocean of muck debris on Monday morning.

Speaking to The New Indian Express, Aparna Kumar, deputy inspector general of the ITBP, said, “We are doing everything we can to save the men. We have rescued total 15 men who were trapped in the other end of this tunnel yesterday. Total 19 bodies have been found while 202 are still missing. Every effort is on by the team on the ground to rescue the trapped and find those missing.”

The missing persons include 189 workers, mostly from outside Uttarakhand including eastern UP and Bihar, 11 local village residents, and two police personnel.

The team has reached up to 100 meters of the tunnel’s 180-meter stretch where the workers are said to be trapped.  The tunnel is a part of the 520 Megawatt project which is now shunned in the wake of disaster.

The flash flood brought so much debris that levels of the Dhauliganga river rose to atleast 80-100 feet above normal engulfing the entire hydropower project and other structures including the tunnel in which workers are trapped.

The entire project site has submerged in muck and debris looking like a marshy landscape with nothing but muddy waters.

Sanjay Kumar, deputy commandant of ITBP, Ist battalion of Joshimath who led the rescue operation and saved 12 lives on Sunday said, “The debris is 20-30 feet high inside the tunnel which makes the rescue mission difficult and slow. Effort are on and we are using every resource at hand. For sometime, we had to dig through the debris with our bare hands to avoid hurting those who were trapped.”

It must be noted that being a Sunday, many workers and officials associated with the project were on leave which minimized the loss of lives.

Bodies were found as far as 160kms in Srinagar including other centers such as Rudraprayag, Kaleshwar, Karnprayag and Chamoli.

Meanwhile, the Uttarakhand government has released Rs 20 crore for Chamoli district to deal with the disaster.

Relatives, friends as well as people from as far as 80 km are at the spot to check if their family member, relative or friend is rescued yet.

Meanwhile, a team from DRDO’s Defence Geo-Informatics Research Establishment conducted an aerial survey of the glacier where the burst took place

The team concluded that prima facie it appears that the hanging part of the glacier disintegrated and broke from the main portion of the tunnel. However, the details are being analysed to draw conclusions.

The Indian Air Force, state government, Indian Army and ITBP are also providing relief material to the 11 villages which are cut off due to washing off of four bridges.