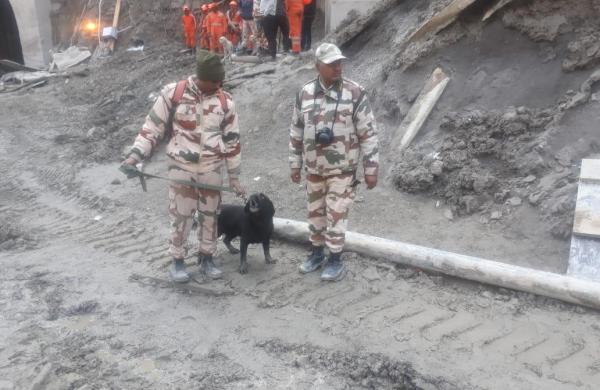 Express News Service
TAPOVAN (Uttarakhand): With a sense of foreboding, the rescue team is continuing the operation with the presence of Rambo and Deisel now.

Two labrador canines, both males, came as the manifestation of relief, a pleasant sight amidst the ombre mood at the Tapovan hydropower project site.

Walking majestically with their handlers they wagged their tails happily at anyone who approached them.

Rambo, the brown one, and Deisel, the black one, are part of the nine-member canine squad which was brought to Chamoli district to ‘search live victims’ as one of their handlers put it.

“These canines are highly-trained and efficient to sniff out the human scent. This squad is the best one. We are hopeful that once the tunnel is cleared, they will help us locate the men,” said Manoj Kumar, the handler of Rambo from the State Disaster Response Force, who has so far saved around 40 lives in his 8-year life span.

The SDRF, apart from its men and machinery, has brought in eight dogs — six labradors and two German Shepherds to help in the rescue. ‘Rambo’ who was present on the tunnel rescue site on Wednesday with his handler Manoj Kumar took a few rounds of the area.

Meanwhile, Deisel, an 8-year-old canine with ITBP is ready to serve at any moment.

Somveer, Diesel’s handler from the ITBP said, “Deisel is extremely efficient and ready to work at any moment. We are waiting for our chance to contribute and save those men. He was trained in the National Training Center for Dogs in Tekanpur of Madhya Pradesh. I am with him since he was just two months old.”

Out of a total of nine, seven are deployed in Tapovan and two in Raini village to locate bodies and live victims.

Elaborating on the type of canines on the basis of their training, Somveer said, “There are trackers, explosive detectors, PEDD (Patrolling and Explosive Detection Dog), SAR (Search and Rescue), narcotics detection based on their specialised training. They are indeed man’s best friend and never let anyone down.”

The trainers of the canines said these animals are brought up like children. “We treat them as our own kids. They are kind and gentle souls who do only good to people. I hope here too they will be helpful,” said Kumar, the handler of Rambo.

They unanimously added that these animals are perceived as personnel of the forces and are referred to as a person — ‘him’ or ‘her’ instead of ‘it’.