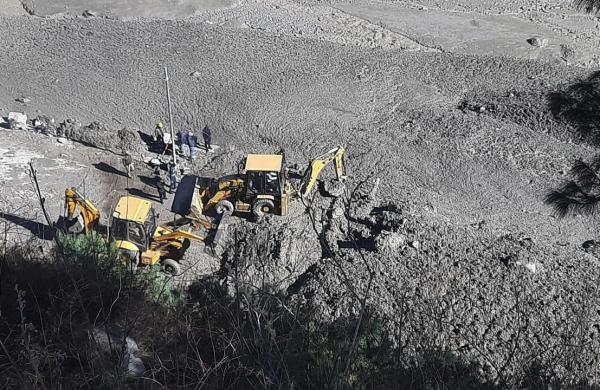 Express News Service
DEHRADUN: Bansilal’s eyes swelled with apprehension while talking about his son Mahendra who is trapped with 36 others in the tunnel rescue team is trying to clear for more than 24 hours.

“Seems like fate has got us. His footwear shop was closed due to lockdown after which he got a job here in November. It has been more than 24 hours now. All I can do is pray,” says Bansilal.

Bansilal was among many others waiting at the rescue site of the Tapovan hydropower project, 15 km from Joshimath in Chamoli district.

The flash flood swept away two hydropower projects in its way — 13.2 Megawatt project on Rishiganga river followed by 520 Megawatt Tapovan project on Dhauliganga river after which 202 people went missing while many others got trapped.

A total of 20 bodies have been recovered so far from various locations where the flood wreaked havoc.

Madan Singh (60) from Kimana village of Chamoli district is waiting for three of his family members to be rescued from the tunnel. Arvind Singh, Kishan Singh, and Rohit Singh — all his nephews in their 20s are trapped in the tunnel.

“My family is totally devastated. We don’t know whether we should hope for the better or be prepared for the worst. We are hanging by the thin thread of hope,” says Singh.

A farmer by profession, Singh recalls how Arvind used to love to watch football. “He is a big fan of the football games and would tune in to the channel showing football matches by irritating everyone else. I want him to fight this tragedy and survive to irritate us again all our lives,” Singh said before he lost control and burst into tears.

Meanwhile, in Raini village, which is known for the legendary ‘Chipko Movement’ of the 70s, many are already mourning the loss of dear ones.

Prem Singh, a resident of the village whose 82-year-old mother went missing said, “Amaa went out for her usual fodder gathering. In our worst nightmares, we never thought of any such thing happening.”

The residents of the village, around 70 of them spent the first night after the flash floods in an area adjacent to a forest infested with wild animals.

Balavant Singh (75), who saved his life from the floods by running away said, “It was like we were choosing to risk our lives both ways. We are still in fear of floods. It remains part of our lives. We took shelter in a dilapidated building and made a fire to keep us warm.”

Residents of the village, who are still in shock and terrified, said that they are lucky to have survived but mourning the loss of their family members.

Radha Devi (65), who went out to collect firewood recalls, “Boulders came flying and the bridge was swept away in a second. The waves roared like thunder and made me deaf. I shouted my heart out but my beloved sister-in-law Amrita was washed away. I saved myself by moving to a higher place. I will never be able to forget that sight and sound.”

Specially abled Chet Singh, who lost his wife Madhuri Devi, said he has lost his will to live. “My wife Madhuri has done no wrong to anyone in her life and now where do I look for her. She will never come back. These blasts and projects are to blame. Our lives do not matter in comparison to these projects,” wailed Singh.