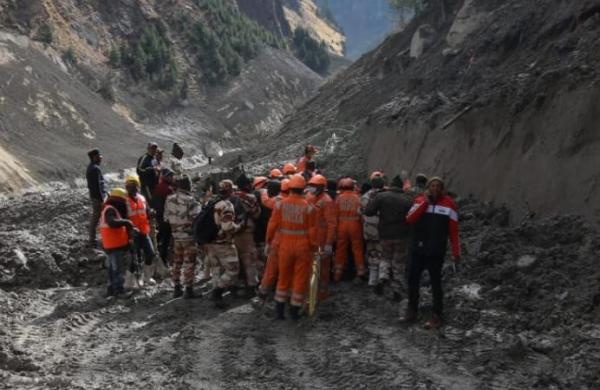 By PTI
TAPOVAN: They stand ashen-faced in small clusters near the devastated barrage of the NTPC’s Tapovan-Vishnugad hydel project, waiting for some news about their missing relatives.

Camping at Tapovan since the glacier tragedy struck in Uttarakhand’s Chamoli district on Sunday, the hope of being reunited with their missing kin brings them every morning to the banks of the Dhauli Ganga, half a kilometre from Tapovan, where intense efforts are underway to trace around 30-35 people trapped inside a tunnel that belongs to the project.

One of the glum-faced bystanders is Dipak Nagwal of Kanchula village, whose sister’s husband Sateshwar Singh, a contractual mechanic, was at work inside the tunnel at the time of the avalanche.

His whereabouts are not known since the avalanche caught the workmen inside the tunnel unaware.

The elder brother of Dipak’s brother-in-law and other relatives are also staying with him at Tapovan in the hope of hearing some glad tiding about their missing kin.

Every time a uniformed securityman comes into view, they run towards him with their queries.

However, the cluster returns disappointed as there is no news yet about Sateshwar.

Three men of Chamoli’s kimana village are also stuck inside the tunnel.

Over 40 people from the village have been camping at Tapovan.

Darshan Singh Bisht, a resident of the village, said three of his relatives — Arvind Singh, Ramkishan Singh and Rohit Singh — are trapped in the tunnel.

Two months ago, the men, aged 18-20 years, joined a firm named Ritik, which worked at the site on contract for the National Thermal Power Corporation (NTPC).

Their parents are waiting for their return.

Standing at the tunnel gate, waiting to hear about his brother DS Bisht, Vijay Singh Bisht of Dak village said his restlessness and worries about the well-being of his brother are growing with every passing minute.

He said advance equipment should have been used for clearing the debris inside the tunnel.

That would have expedited the rescue operations, he said.

Bhawan Singh Farswan (60) of Karchaun village has been coming to the tunnel site along the Dhauli Ganga river since Sunday to find out about a young man from his village, who, he said, is trapped in the tunnel.

Two members of his family are also missing from the demolished Rishi Gana hydel project site at Raini, Farswan said.

People from different parts of the country have gone missing in the tragedy, including 19 from Datunu village of the Jaunsar area in Dehradun district.

Amar Singh of Datunu, who has come to enquire after his fellow villagers, said the entire village is in a state of shock after the calamity.

“A total of 25 residents of my village worked at the NTPC project site, of whom six had a day off on Sunday and were luckily saved, but the rest are trapped inside the tunnel,” Singh said.

The scene at Raini, where 46 people went missing at the Rishi Ganga project site, is similar.

People have gathered there to find out about their relatives.

Four bodies were recovered at Raini on Tuesday, State Disaster Response Force (SDRF) commandant Navneet Singh Bhullar said, adding that one of the bodies was that of a police constable.

“The daunting task of clearing the debris inside the tunnel at Tapovan is being dealt with by a multi-agency team of security personnel and we hope to make a headway,” he said.

The death toll from the Uttarakhand glacier disaster has climbed to 31 with five more bodies recovered, while around 175 people are still missing, officials said on Tuesday.