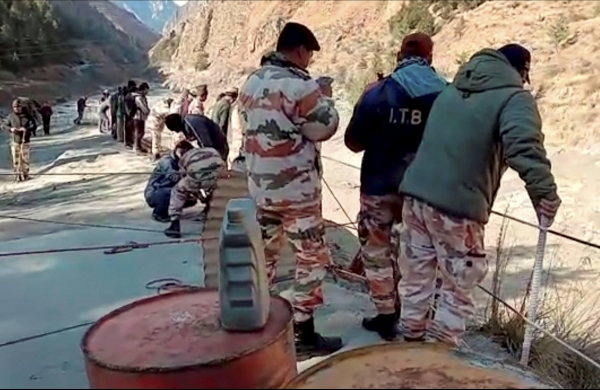 Express News Service
NEW DELHI: The glacial burst in Chamoli on Sunday has led to major devastation and loss of life. The Armed Forces, Army, Air Force and Navy have moved in their specialised teams with equipment to carry out rescue operations.

Army personnel has entered along with the specialised equipment at Ringi Village near Joshimath.

Army aviation’s two cheetah helicopters have been put on aerial recce while an Engineering Task Force with two JCBs have been deployed.

A medical column with two ambulances, and a control room has been set up at Joshimath.

The Indian Air force has moved in 60 persons of National Disaster Relief Force with 5 ton load from Hindon to JollyGrant Airport in IAF C130. One more C130 and a AN 32 has been madea available at Hindon for deployment of additional NDRF teams.

Three IAF Mi-17 have been positioned at JollyGrant to airlift NDRF teams to Joshimath.

The Navy also has moved in a specialised team for rescue operations. “MARCOS teams, 16 personnel at New Delhi and 40 at Mumbai ready for deployment.” Field hospital has been made ready for receiving casualties.

Many labourers are said to be trapped in Tapovan Tunnel as it was completely blocked by debris. CAPF Personnel have been tasked to remove the debris to rescue the trapped labourers.

The incident of glacial fall in the river Rishiganga took place at around 10:45 am leading to rise of water levels which washed away the Rishiganga small hydro project of 13.2 MW.

The flash flood also affected the downstream hydro project of NTPC at Tapovan on the river Dhauliganga.