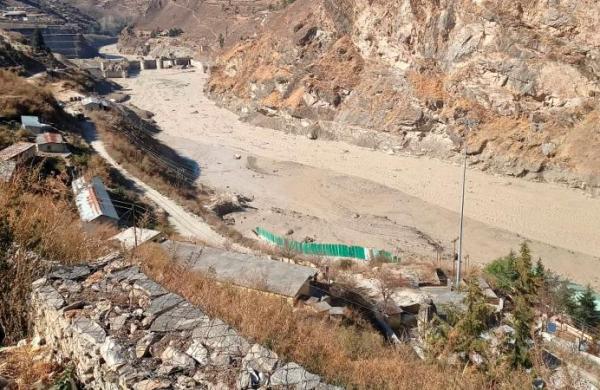 By PTI
RAINI: It was a tranquil winter morning in Raini village until the residents were jolted at around 10 AM on Sunday by a loud sound and the sight of huge torrents of water and sludge in the Rishi Ganga river hurtling towards them.

“Before we could make out what was happening, the raging muddy waters of Rishi Ganga had devastated the landscape,” says 50-year-old Dharam Singh, a resident of the village.

The scenes brought back to the people horrifying memories of the 2013 Kedarnath deluge that killed thousands.

Many were feared swept away in the sudden floods on Sunday including those who were working near the river.

Three residents of the village including a 75-year-old woman identified as Amrita Devi who had gone out to work in her field close to the bridge on Rishi Ganga are missing since the avalanche struck after the Nanda Devi glacier burst.

Others missing include Yashpal Singh of Valli Raini who had gone to the fields to graze his livestock and disappeared along with them.

Ranjit Singh, 25, of the village who worked in the Rishi Ganga hydel project is also missing after the avalanche.

The avalanche destroyed the project commissioned in 2020.

A major motorable bridge on the main border road was also washed away.

Pradeep Rana of Juwa Gwan village said Sanjay Singh, a resident of the same village who had gone out to the fields to graze his goats, is also missing.

Some ancient temples built about 20 metres above the confluence of Rishi Ganga and Dhauli Ganga rivers have also been swept away by the violent avalanche.

Umeli Devi, 34, who had come from Nepal to work in the Rishi Ganga hydel project said ten of her colleagues had been swept away in the avalanche.

She said male members of her family who worked as labourers in the power project are all missing.

Dharam Singh of Raini said as the deluge came gurgling loudly it sent a chill down the spine of people living in the area who find it hard to forget the 2013 tragedy.

The forest area of Nanda Devi National Park has also suffered great devastation due to the avalanche, he said.

While seven bodies were pulled out from the power project tunnel, at least 125 people were still missing in the affected areas.