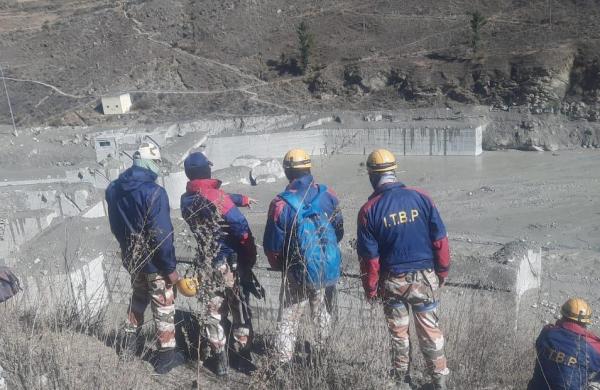 By PTI
TAPOVAN: Security personnel drilled a hole on their way to a possible location of over 30 people trapped inside the sludge-choked Tapovan tunnel, making a headway at last in the prolonged rescue efforts.

However, efforts were afoot on Saturday to widen the hole so that a camera could be inserted into the tunnel to get a clue of the trapped men, officials said.

Drilling of a 12-metre-long hole of 75 mm diameter in the intake adit tunnel to its inside has been successful, National Thermal Power Corporation (NTPC) Tapovan, General Manager, R P Ahirwal said.

“This is a good sign as there is no water or slush pressure observed in the silt-flushing tunnel,” he said in a release.

“However, the camera could not be inserted due to the presence of slush. Drilling of a larger diameter hole has been planned now. Meanwhile mucking from the intake adit tunnel is in progress. The diameter of bore hole shall be 250-300 mm,” he said.

The marathon rescue operations at the NTPC’s Tapovan-Vishnugad hydel project which suffered heavy damages in the Rishi Ganga avalanche entered the seventh day on Saturday.

So far, 38 bodies have been recovered from the affected areas while 166 people are still missing.

As many as 25-35 people are believed to be trapped inside the Tapovan tunnel.

The State Emergency Operation Centre here said scientists of the Indian Institute of Remote Sensing during an aerial survey of Rishiganga found that the glacial lake formed due to the avalanche over it has begun to release water which reduces chances of its breaching or causing a flash flood.

The lake, which has formed over Rishiganga after the flash flood, had increased the concern of experts on Friday.