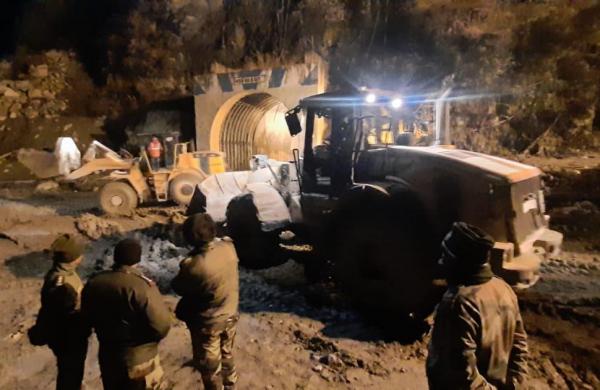 Express News Service
TAPOVAN: The rescue teams at Tapovan have started widening a hole drilled into an approach tunnel on the way to the possible location of over 37 people trapped inside the tunnel of the NTPC’s hydel project.

After drilling the tunnel ground 12 meter deep and 75mm in diameter, the NTPC began widening it to almost one foot which is estimated to take 8 more hours.

“The NTPC has decided to increased the diameter of the hole to reach the Silt Flushing Tunnel where the men are suspected to be trapped,” said Ravinath Raman, commissioner of Garhwal division of Uttarakhand.

The decision came after the rescue team could not see through any camera device in the SFT.

Reports of discontent among state government officials emerged on NTPC officials not being able to devise any strategy which can result in any breakthrough.

“Yaar, ye NTPC wale kisi kaam ke nahi. Bs goli de rhe hain! (These NTPC guys are good for nothing. They are just dodging the ball it seems), ” said a senior official from Chamoli district who was present in the meeting taken by commissioner of Garhwal division on Saturday to review the progress of the rescue efforts inside the tunnel by the NTPC Limited.

Meanwhile, the rescue teams reached up to 136 metre of the 180-meter tunnel, said the officials. The NTPC officials were also quoted saying that more than 100 scientists are at work to find a way to rescue the trapped men.

The state government said the lake which is formed 8 kms upstream from Raini village has around 40-50 meters wide gap through which the water is draining out in a stable manner. The team comprising State Disaster Response Force, National Disaster Response Force, scientists, experts, and geologists visited the lake to asses the ground situation on Friday and Saturday.

Satellite images along with a spot visit by a group of experts scientists from various institutions of the center and the state revealed that around 65-70 crore litre water has accumulated in the lake. Till date, total 38 bodies have been recovered while 166 are still missing.

Nilesh Anand Bharney, incharge of the State Police Disaster Control Room said, “Total 11 bodies have been identified. We have also recovered 18 body parts from the flood-hit areas out of which 24 have been cremated after taking the DNA samples for further identification.”