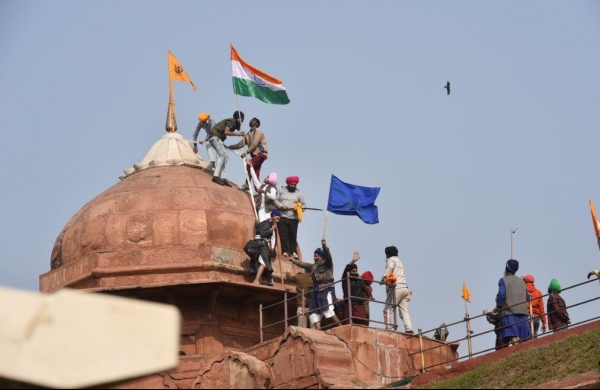 Express News Service
DEHRADUN: Uttarakhand Police has ‘identified’ at least 300 people from the hill state who were part of a mob that stormed the Red Fort and clashed with security personnel on January 26, said officials.

However, farmer leaders demanded a high-level inquiry into the matter. President of Terai Kisan Mahasabha, Tejinder Singh Virk, who has been named in the FIR filed by Delhi Police, said, “The farmers protesting at Ghazipur border had no role in the events that unfolded in Delhi on Republic Day and there should be an inquiry to reveal the conspiracy. We are patriots and can lay down our lives for our country.”

After violence by farmers on Republic Day in Delhi and rumours about a Uttarakhand farmer’s death, the government had issued an alert in the hill state. Later, it turned out that the farmer belongs to the Rampur district of Uttar Pradesh adjacent to Udham Singh Nagar district of Uttarakhand.

Thousands of farmers have been protesting on the different borders of the national capital since November 26 against the three newly enacted farm laws – Farmers’ Produce Trade and Commerce (Promotion and Facilitation) Act, 2020; the Farmers Empowerment and Protection) Agreement on Price Assurance and farm Services Act 2020 and the Essential Commodities (Amendment) Act, 2020.

As farmers’ agitation continues in the Delhi-NCR region against newly framed farm laws, a village in Uttarakhand has banned entry of Bhartiya Janta Party members, workers, and leaders in the village.

Posters, banners and hoardings have come up in Malpuri village of Udham Singh Nagar district warning the ‘anti-farmer’ BJP workers and leaders. Farmers from the district have been actively supporting the Delhi-NCR protests.

In December 2020, state police had registered a case against over 1,000 farmers after they marched towards Delhi breaking the barricading by Udham Singh Nagar police.

The police had tried to stop the farmers by force responding to which the farmers defied the ban and went ahead.

With 42% of agricultural produce, Udham Singh Nagar district leads among 13 districts of Uttarakhand in terms of agriculture and is also known as the food bowl of the state.