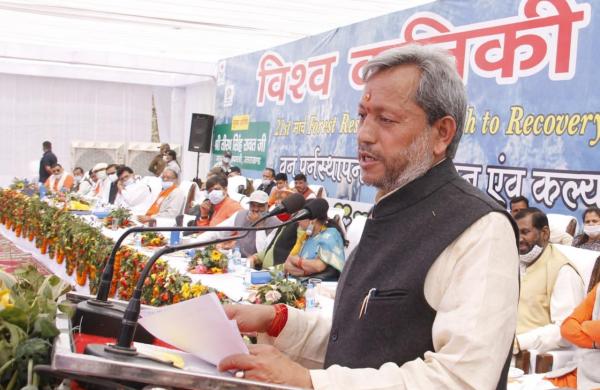 Express News Service
Dehradun: Uttarakhand Chief Minister Tirath Singh Rawat is back with another headline- this time he blames people for not ‘producing’ enough children.

“Now brother, who is to blame for this?? He produced 20 (children) and you produced only two. So he gets a quintal of ration. When there was time you produced only two why not 20? Now, why jealousy?,” said the CM while talking about government schemes of ration distribution in his speech on Sunday on his visit to Ramnagar in Nainital on the occasion of World Forestry Day.

He said that the government provided 5kg per person and those with 20 got a quintal (100kgs) of ration during pandemic times.

“Every house was provided with 5kgs of ration per unit (person). Those with 10 got 50kgs, those with 20 got a quintal of ration and those with two got 10kgs. People started a ‘store’ out of it and got themselves a buyer. The rice was so good that no one has got such quality in even normal days, leave aside pandemic times. But then they started to get jealous of each other that I got only 10kgs for two and another person got a quintal for 20,” the CM said.

Rawat also wrongly blamed the United States of America for 200 years of rule in India.

He compared India with the US in increasing number of COVID-19 cases adding that as opposed to other countries, India is doing better in handling the pandemic.

“America, who enslaved us for 200 years and ruled the whole world… it is struggling at present,” the CM said.

He further added that the US is number one in the health sector and yet suffered from more than 50 lakh COVID-19 deaths and the country is heading towards a lockdown.

Opposition tore in the state government and the Bhartiya Janta Party for the CM’s statement.

Suryakant Dhasmana, vice-president of Indian National Congress said, “The people of Uttarakhand are not going to forgive the BJP. People gave you crushing majority with 57 MLAs out of 70 and what did you do? You left us with the likes of Trivendra Singh Rawat and Tirath Singh Rawat. People will never forgive you for this.”

Earlier, last week the CM courted controversy over his ripped jeans remark and how wearing such dress promotes substance abuse.

However, he later apologized for the remark.