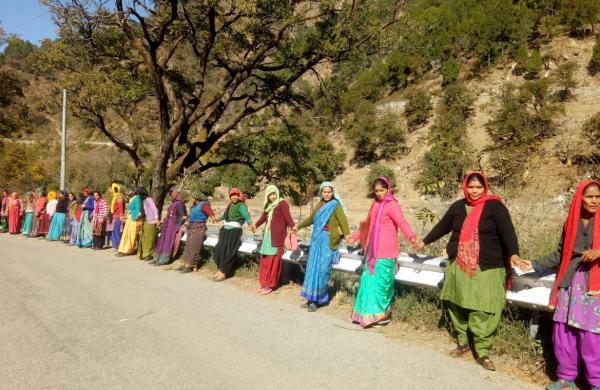 Express News Service
DEHRADUN: Residents of 70 gram panchayats of Ghat block of Karnaprayag in Chamoli district came out on the road on Sunday to form a 19 km-long human chain along the narrow, pothole-ridden Gopeshwar-Nandprayag Ghat road.

Their only demand was the widening of the Ghat road that connects Sidhpeeth Kurud to Nandprayag Ghat which is crucial to them.

Chief Minister Trivendra Singh Rawat took notice of the protest on Monday and instructed the public works department to widen the road.

The human chain, mostly comprised of women of the area, was formed by adhering to the norms of social distancing of six feet as per Covid safety norms. As the road flooded with people forming a human chain starting at around 11 am, district police and administration had to struggle to maintain the flow of traffic and clear congestion on the road.

Usha Rawat (52), a resident of Sera village, who decided to be the last of the human chain, said, “Road widening was our long lasting demand. The government is supposed to provide people with these basic facilities. If the government can’t even provide roads, water, power, and other basics what kind of government that would be?”

Locals said that at present the road is 3.85 meters wide and is full of potholes.  “The road is so bad that accidents are frequent claiming lives. In 2014, 22 people lost thier lives in a bus accident. Besides, traffic on this stretch of the road has increased in the last few decades but the road is almost the same as it was built in 1962. Upgradation of the road is much needed,” said Bharat Singh Negi (68), a resident of Tenga village.

The road was laid in 1962 connecting a total of 70 village panchayats of the district.

The road also has religious significance as Nanda Rajjat Yatra of Uttarakhand, which takes place every 10-year, passes through this road. Kurud temple, one of the important seats of Goddess Nanda Devi, lies on the stretch of this road.

The protestors said that the government was planning to widen the road upto 7 meters while their demand is for 9 meters.

Four residents of the area have also been sitting on an indefinite fast since Saturday. Charan Singh Negi, one of them, who has been agitating for the last 36 days said, “The government is not paying any attention to what we are protesting for. This is just an empty promise. We are not going to accept this.”

Manoj Kathait, another protestor said, “If our demands are not met, we will increase the intensity of agitation. The government will be responsible for that.”

People of the area said that two years ago, the Chief Minister had promised the widening of the road but nothing happened.