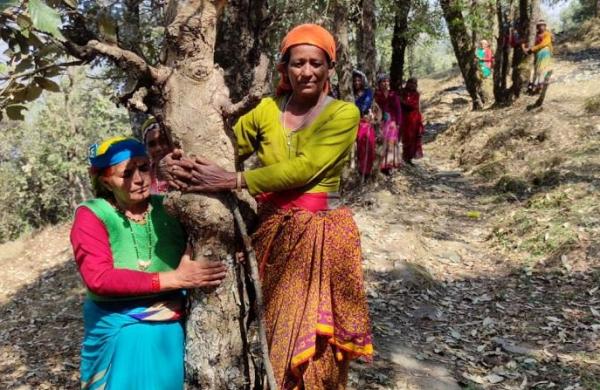 She is not alone. Hundreds of women from the village are doing the same to save over 500 trees in the village which are to be felled to pave way for a 2 kms motorable road.

“This a a forest which was dedicated to Kotgari Goddess of justice. We do not even collect fodder from these forests as they belong to Devi Maa. The road from Kamedi Devi to Chaunala area will destroy the local ecosystem and will prove detrimental for the people of the area as well as the environment,” says Kamla Devi, Sarpanch of Jaakhni village who is leading the movement.

The tradition of dedicating the forests to the Goddess is said to have started in 1978 in Bageshwar district when people dedicated forest areas on the verge of disappearing due to excessive cutting of trees and other kinds of exploitation.

Later, the practice spread in neighbouring district of Pithoragarh where people started to dedicate green belts, small patches and such forests to the Goddess and local deities who were revered as well as feared.

Hemwant Singh Mehta, a resident of Jaakhni said, “The practice helped in revival of green cover in the districts and as of now around 6000 hectares of green cover/forests belong to Devi Mata. The loacl people have stopped over exploitation and protect the forests as revered places.”

Mostly located in Bageshwar, Almora and Pithoragarh districts these green belts range from two hectares to more than 100 hectares.

The ritual of dedicating of the forest involves an oath taking ritual, signing of a stamp paper which says the community is dedicating that particular forest, patch or land peice to the Goddess for a certain duration ranging between 5-15 years and no one will defile the territory of the deity with any act which is detrimental to environment and ecology including felling of the trees.

People of the area, especially women say that these trees are no less than their children. They also add that the road and felling of trees pose serious threat to natural water springs in the area.

Basanti Devi from.the village said, “Every plant and tree has been nurtured like children of our own. We will not allow falling of axe on these trees.”

The residents of the area allege that the authorities are adamant to cut down way more trees than actually approved.

Narayan Dutt Pandey, forest range officer of Dharamghar said, “The matter is in our knowledge. Permission has been granted for a certain number of trees and no more than that will be felled.”