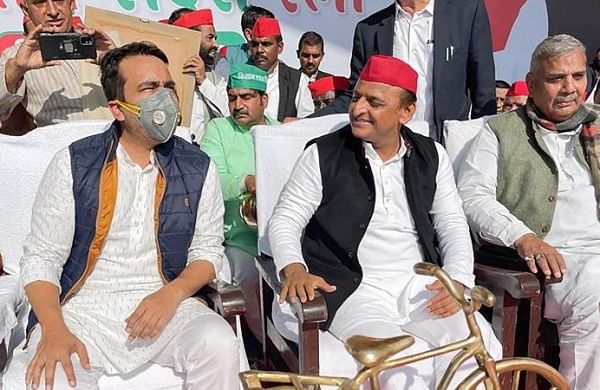 LUCKNOW: After facing a rout in the recently concluded UP Assembly election despite having taken its tally to 111 from 47, Samajwadi Party chief Akhilesh Yadav has played his cards in Rajya Sabha polls sensibly following a three-pronged strategy– of mollifying Azam Khan, cementing ties with RLD and keeping the minority community in good humour–with an eye on the general elections of 2024.

Notably, in the last two general elections—2014 and 2019—SP failed to take its tally of MPs beyond five despite having stitched a grand alliance with arch-rival Bahujan Samaj Party (BSP) in 2019.

However, the SP picks for the upcoming Rajya Sabha elections, slated for June 10, reflect the strategy to make SP’s fight more robust in 2024. As per the political pundits, by choosing Kapil Sibal, the Samajwadi Party chief has tried to mollify sulking Azam Khan, a senior party leader and Rampur MLA, who had been languishing in jail for 27 months in connection with a series of cases.

Kapil Sibal represented Azam Khan in a cheating case in Supreme Court and played a crucial role in securing interim bail for him leading to his release from Sitapur District Jail on May 20.SP obliged Sibal who served a great jolt to Congress party by quitting it in the middle of this month.

The selection of Jayant Chaudhury, too, has political connotations. Besides cementing the SP-RLD alliance further in the wake of 2024 electoral battle, the SP has tried to woo the Jat voters of western UP. However, the alliance was there in the assembly polls as well but it could not reap the results on expected lines in the constituencies dominated by Jats.

The impact of the tie-up between the two parties, trying to capitalize on the prolonged farmers’ stir, was limited to Shamli, Meerut and Muzaffarnagar. Of the 113 seats which went to polls in the first two phases, basically in western UP, the BJP won 78 seats and SP and RLD 45.

The SP insiders claimed that till the last moment on Wednesday night, Akhilesh’s wife and former MP, Dimple Yadav’s name was doing rounds as the party candidate for Rajya Sabha. This upset Jayant Chaudhury after he got the message that he was put out of the race. Jayant was purportedly promised an RS seat by Akhilesh during the UP assembly polls.

However, sensing a potential threat to the alliance, the SP chief changed his decision and met the RLD MLAs on Thursday morning before announcing Jayant as the joint SP-RLD candidate for the upper house.

Highly-placed SP sources also claimed that though Akhilesh had promised to send Jayant Chaudhary to the Rajya Sabha but they had a disagreement. While Akhilesh Yadav wanted Jayant in the upper house as a Samajwadi Party’s member, latter was insisting on representing his own party RLD backed by the SP.

Fearing that BJP may woo Jayant before 2024, Akhilesh finally took the call in his favour and declared him the Joint candidate of SP and RLD. Moreover, the third candidate named by Akhilesh Yadav is Javed Ali Khan who has filed his nomination papers for the upper house.

“The decision in favour of Javed Ali Khan also seems to be party’s well thought out three-pronged strategy of mollifying Azam Khan, cementing tie-up with RLD and keeping the minority community in good humour for better prospects in 2024,” said Prof AK Mishra, a political scientist.

It may be recalled that after consolidating in favour of SP in the 2022 polls, the minority community had not been happy with the SP leadership resulting in a series of resignations by the Muslim leaders. Their main refrain had been the guarded silence of the SP chief over alleged atrocities on Muslim leaders like Azam Khan and Mohammad Shahjeel.