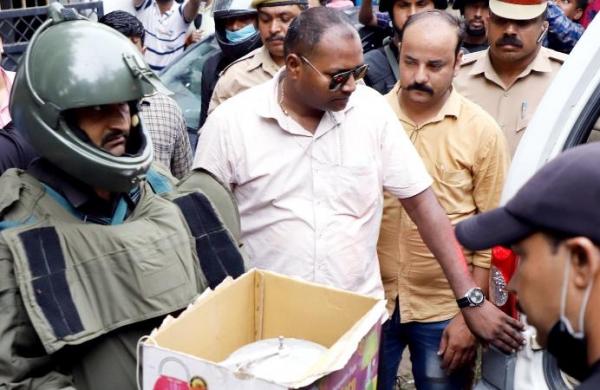 Carrying out day long search operations at houses of suspects in Dubagga (Kakori) and Mandiyaon areas of Uttar Pradesh’s capital Lucknow’s outskirts, the state police’s anti-terror squad (UP ATS) claimed to have busted the alleged UP module of Al Qaeda’s in Indian Subcontinent (AQIS)’s Indian arm Ansar Ghazwat-ul-Hind (Helpers of the Conquest of India) by arresting two men, identified as Minhaz Ahmad (30) and Masiruddin alias Mushir (50).

According to the UP Police’s additional director general (ADG Law and Order) Prashant Kumar, the UP ATS team under supervision of IG-ATS GK Goswami foiled the plot of the UP module of the AQIS’s Indian arm to carry out serial blasts-human bomb attacks across the state, including Lucknow before the Independence Day.

“The two men arrested from separate police station areas on Lucknow’s outskirts were among the three key members (a man named Shakil being the third one) of the global terror outfit’s UP module, which has members in other parts of UP also. The arrested duo and their aides were being handled by their AQIS handler identified as Umar Al-Mandi, who has been handling them from Quetta and Peshawar cities of Pakistan close to the Pakistan-Afghanistan border,” the UP ADG(L&O) added.

The search operation at Minhaz and Masiruddin’s house has led the police to explosives and a pistol. The seized explosives included fully finished and preparatory pressure cooker borne Improvised Explosive Devices (IEDs), which are being defused by the bomb detection and disposal squad of state police, Kumar maintained.

“Similar search operations are being carried out in other parts of the state also by the ATS units in association with local police forces to track and nab remaining members of the busted module, including men from Lucknow and Kanpur,” Kumar informed.

As per the police officials, the preliminary questioning of the arrested men has revealed that men across the state were being radicalized by this module at the behest of module’s handler Umar-Al-Mandi, who is presently heading the AQIS’s India operations under the banner of Ansar Ghazwat-ul-Hind (Helpers of the Conquest of India).

Importantly, the AQIS (Indian subcontinent arm) of Al-Qaeda was formed by the global terror outfit’s head Ayman-al-Zawahiri in September 2014 with Asim Umar (a native of Sambhal district of West UP) as its Emir. Five years later, AQIS chief Asim Umar was killed during a joint US-Afghanistan military raid in Helmand province of Afghanistan.

“During interrogation, the accused persons said that their accomplices ran away from their house. The ATS team along with the local police has undertaken intensive checking,” Kumar said and added that a case has been registered in this connection at the ATS station.

They will be produced before a court, and then taken into police custody.

The official said that an improvised explosive device (IED) was found at Ahmed’s house along with a huge amount of explosive and a pistol. Explosives were also seized from Maseeruddin’s residence, he said.

The IED is being defused by the bomb squad, the ADGP said.

He said that in 1988, at the time of Soviet-Afghan war, Osama Bin Laden and some of his associates had formed the Al-Qaeda, a militant Sunni Islamic multi-national terror organisation.

The module of the Indian sub-continent was announced by then head of the terror group Ayman al-Zawahiri on September 3, 2014.

Maulana Asim Umar, who headed the Al-Qaeda in the sub-continent was killed on September 23, 2019 in an US-Afghan operation, Kumar said.

He had links with Sambhal in Uttar Pradesh, Kumar said.

Umar Halmandi had started the work of recruiting men for the Al-Qaeda in India, and radicalise them, he said.

“For this, he had identified some aggressive persons in Lucknow, appointed them, and built the Al-Qaeda module. This module was made to unleash terror activities under the Ansar Ghazwatul Hind. Prominent members of the module are Minhaz Ahmed, Maseeruddin and Shakeel,” he said.