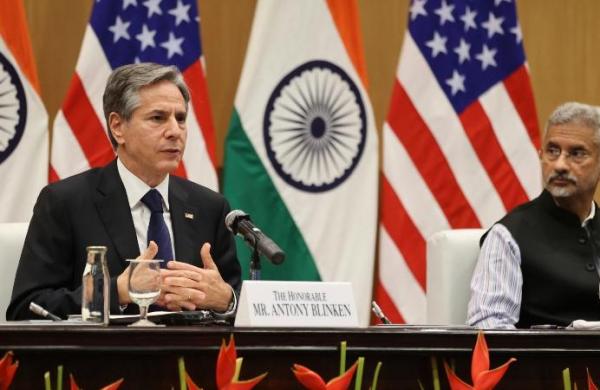 Express News Service
NEW DELHI: Ahead of the visit of US Secretary of State Antony Blinken, the anticipation was that he will take up issues related to human rights during his meeting with External Affairs Minister S Jaishankar but all seems to have turned into a damp squib as the US official remarked after the meeting that all democracies are works in progress.

The probable ease in the US’ stance is in contrast to expectations when Joe Biden assumed office of the US President earlier this year. It was widely expected that the Biden, unlike his predecessor, would not hold back to call out New Delhi for issues related to human rights.

So, why has there been a ‘downgrade’?

Experts are of the view that that US-India relations are no longer based on a narrow interpretation of issues and so-called irritants and has transformed into a mature and broad-based relationship. “The US will side step being too harsh or critical against India as it does not want to disturb many aspects of the growing bilateral relationship. When compared to the 1990s and the early 2000s, there is a lot more at stake for the US, as is for India, to be vocally against New Delhi,” a research scholar at a leading think-tank said.

However, some experts argue that that Blinken’s humility may have stemmed from the recent historical experience of the US interventions in Afghanistan and Iraq. “In the 1980s, the US worked with Mujahideen in Afghanistan to defeat the Soviet Union. After the collapse of the Soviet Union, the United States dropped the ball in Afghanistan and returned only after the dastardly 9/11 terrorist attacks. After almost two decades of having boots on the ground, the United States has withdrawn from Afghanistan, leaving space open for the Taliban. Unlike the other authoritarian groups, the Taliban denies not only political freedoms, but it seeks to define people’s social lives and even individual clothing choices. Similarly, after prolonged US intervention, it is doubtful if citizens of Iraq enjoy full-spectrum human rights and political freedoms,” Senior Fellow at the Delhi Policy Group, Sanjay Pulipaka said.

Senators too have vocally voiced concerns over the Kashmir situation. In the aftermath of India’s decision to abrogate Article 370 in August 2019, Senator Lindsey Graham, who was considered to be close to former President Trump, in a report had said, “The Appropriations Committee notes with concern the current humanitarian crisis in Kashmir and calls on the Government of India to: fully restore telecommunications and Internet services; lift its lockdown and curfew; and release individuals detained pursuant to the Government’s revocation of Article 370 of the Indian constitution.”

Pulipaka opines that the downgrade of criticism against India could be a part of a larger foreign policy strategy by the US. “The unipolar moment in world politics is long gone. Consequently, the US attempts to rap on the knuckles of fellow democracies or others may not yield positive outcomes. For example, a relatively smaller power like Myanmar today is not losing sleep over US sanctions. So, the US needs other democracies to promote human rights in different regions of the world. It is here that frameworks such as Quad come into play. While the democracies continue their “quest for a more perfect union,” they should simultaneously protect and promote democracy in the larger Indo-Pacific region. Blinken’s humility, therefore, is a confident call for more collaboration and a calibrated approach towards the promotion of human rights,” he said.