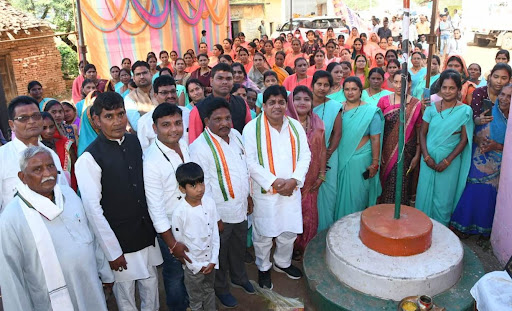 Urban Administration and Development and Labor Minister Dr. Shivkumar Dahria gifted various development works in the development block Arang of Raipur district. These works include construction of roads, ponds, schools, community buildings including drains and other works. Dr. Dahria honored Mitanins and Sarpanches by participating in the Sarpanch and Mitanin Samman Samman ceremony during the one-day program of Arang block area. Including drinking water and other works costing about 75 lakh 50 thousand rupees were inaugurated and foundation stone laid. Dr. Dahria announced to provide 20 lakh rupees for construction of training hall for Mitanins at Arang and also announced to install a statue of Dr. Bhimrao Ambedkar in Karamchari Bhawan. Dr. Dahria informed that Rs. 2 crore 50 lakh has been sanctioned for new community health center at Arang. While addressing the Mitanin and Sarpanch Samman ceremony, Dr. Dahria said that under the direction of Chief Minister Bhupesh Baghel, villages, poor, farmers in Chhattisgarh. Various welfare schemes are being operated for all sections including He informed that under the Rajiv Gandhi Kisan Nyay Yojana, three installments have been transferred to the accounts of the farmers of the state. The amount of the fourth installment will also be transferred to the accounts of the farmers soon. He said that Chhattisgarh is the only state in the country where paddy is being procured from farmers at the highest price. Under the Rajiv Gandhi Krishi Mazdoor Nyay Yojana, agricultural laborers who have their own land for cultivation will be given an annual assistance of Rs.6 thousand. Similarly, youth are being linked with Rajiv Gandhi Mitan Clubs. Small traditional businessmen are being supported through the Pauni-Pasari scheme. He said that economic activities have not been affected in Chhattisgarh even during the Corona period. Panchayat representatives, Mitanin Didis and citizens and officials and employees were present in the program. Like this:Like Loading… Continue Reading

Madhya Pradesh moving ahead in the interest of fishermen