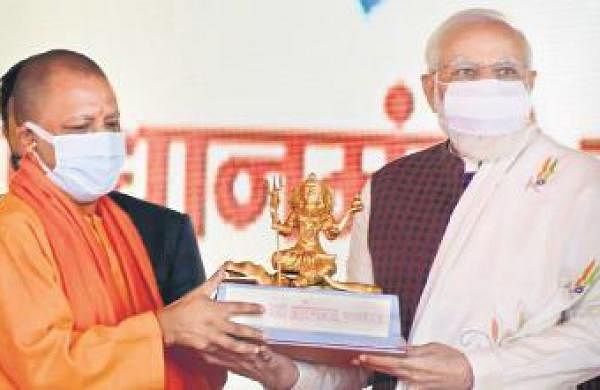 LUCKNOW: Congress leader Priyanka Gandhi Vadra on Saturday kickstarted her party’s virtual campaign ahead of the UP Assembly polls and said women are at the centre of discourse in the state and she won’t let them be ignored.

If political parties feel that only giving a gas cylinder to them is their only responsibility, then they are seriously wrong, she said.

The Congress general secretary said women constitute half of the population and she personally favours giving 50 per cent of party tickets to them.

The Congress leader, who is leading her party’s poll campaign with women-centric promises, said this interacting with girls from UP, just ahead of the announcement of the poll schedule by the Election Commission, which banned physical rallies till January 15 amid a surge in Covid cases.

The party had recently decided to do away with physical rallies due to rising Covid cases.

The Congress leader said she would like to take her party’s “Ladki Hoon, Lad Sakti Hoon” campaign across all states.

“In the past one month’s time, all political parties in UP have started talking about women issues. Be it the SP, BJP or AAP, you can see they are suddenly making announcements for women and this is a great achievement,” she said.

Naming New Zealand Prime Minister Jacinda Ardern and her grandmother Indira Gandhi as her inspirations, she termed fearlessness as the biggest quality of the former Indian prime minister and recounted an incident to highlight as to why she was called an iron lady.

On the lack of women leaders in political parties and whether giving 40 per cent tickets to women in the UP elections will be too progressive, she said strong steps are required when a change has to be brought in.

“I personally favoured 50 per cent,” she said.

“It is a step whose time has come, it is time for women to stand up and understand that we are 50 per cent. Forty per cent is not right enough, 50 is the right percentage,” she said.

When questioned how she will face the challenge posed by the ruling BJP, she said, “Negativity can only be dealt with positivity.”

“Some more campaigns have been planned by the party but they are all positive ones like how to remove hurdles and how development should be a real one, not like the one where at election time, an airport is inaugurated and picture of China is shown on social media, showing development in advertisement when actually all sections are feeling harassed ,” she said.

When asked if politics is safe for women, she said in the Congress list, women who have struggled a lot will be given a place.

The woman who was manhandled in the recent panchayat elections and whose sari was pulled in the public will also find a place, she said.

Stressing that men need to change their views and look at women as equal, Priyanka to another question said for 25 years, her focus had been her house and children and though it is difficult, managing politics and household duties is not too much of a problem.

The Congress leader said she had been in Covid isolation for the past one week and requested patience as she was using the platform for the first time.

As model code of conduct comes into force, the Uttar Pradesh food safety commissioner on Saturday ordered not to distribute free food packets containing photographs of the prime minister and chief minister at the fair price shops.

The order in this regard was issued by food commissioner Sorabh Babu to all district magistrates of the state after the Election Commission on Saturday announced the poll schedule in Uttar Pradesh, Uttarakhand, Punjab, Manipur and Goa.

“The food commissioner of Uttar Pradesh issued directions to all district magistrates of the state not to distribute free food packets containing photographs of Prime Minister Narendra Modi and Chief Minister Yogi Adityanath and tagline’Soch Imaandaar, Kaam Damdaar’, at the fair price shops,” it said.

In the politically important Uttar Pradesh, voting will be held in 403 assembly seats, starting from the western region and will move towards the east over seven phases from February 10 to March 7.

The Model Code of Conduct has come into effect in the five poll-bound states.

It will be a “80 per cent versus 20 per cent” election in Uttar Pradesh and the BJP will retain power in the state, Chief Minister Yogi Adityanath asserted on Saturday and said his party will fight the polls on issues of nationalism, good governance and development.

Voting for the high-stakes assembly elections will be held in seven phases, starting from the western part of the politically crucial state on February 10 and moving eastwards, with the final phase on March 7.

It will be an “80 per cent versus 20 per cent” poll in Uttar Pradesh, Adityanath claimed while speaking on the last day of a two-day Doordarshan Conclave ‘Kitna Badla UP’ here.

His remarks came before the Election Commission on Saturday announced the poll schedule for Uttar Pradesh, Uttarakhand, Goa, Manipur and Punjab, bringing the Model Code of Conduct into effect.

Muslims constitute around 20 per cent of the state’s population.

Hitting out at Adityanath for his remarks, Samajwadi Party (SP) spokesperson Rajendra Chaudhari said, “Although the statement of 80 per cent versus 20 per cent is aimed at giving a communal colour, but people will not take notice of it.”

There will be no such issue as Hindu-Muslim in these elections, and people will vote to save democracy, he said.

“The CM is mentioning the poll percentage that will come the BJP’s way, which is 20 per cent. The BJP is a party of only 20 per cent, and 80 per cent people will vote against it. People have made up their mind to vote the BJP out because of its wrongdoings in the past five years,” Chaudhari said.

Congress national spokesman P L Punia said, “The BJP has always indulged in politics of polarisation. It has done nothing on the development front, so today it is talking about 80 per cent versus 20 per cent.”

“The BJP has done nothing. It run the government on basis of events. This (CM’s statement) is a sort of acceptance of defeat. The BJP has nothing to talk about but rake up the Hindu-Muslim issue. This will not help it,” state Congress spokesman Ashok Singh said.

During the programme, Adityanath also said, “I can say with confidence that some, who are victims of misunderstanding, are trying to impose their numbers (in terms of population). But, this election will be 80 versus 20. The 80 per cent supporters will be on one side, 20 per cent on the other.” Attacking the previous SP government, he said before 2017, there used to be riots in the state and “professional rioters” were honoured at the chief minister’s residence.

“The government and police used to plead in front of rioters. Changes came after 2017. Today professional rioters are hiding or have gone on a journey to another world. Before 2017, terrorists carried out explosions wherever they wanted, but after 2017, there has not been a single blast, not a single riot. The difference is clear,” he said.

The BJP after forming government in Uttar Pradesh in 2017, has worked on Prime Minister Narendra Modi’s mantra of ‘Sabka Saath, Sabka Vikas’, Adityanath said, adding “we have given benefits of development schemes to every one, we have done development of all, but have not appeased anyone”.

“If someone considers this as our weakness, then this weakness will always be with us, because nationalism is our culture. We will never deviate from the issue of our nationalism. Secondly, how will any anti-India or anti-Hindu elements accept Modi ji and Yogi, they will never accept us,” he said.

“Even if I cut off my neck and present it in front of such elements on a plate, they will still curse me. We don’t care about such elements,” Adityanath said.

The BJP will fight the polls on issues of nationalism, good governance, development and the rule of law.

“The rule of law and everyone’s safety is our priority, but not anyone’s appeasement,” he said.

Taking a swipe at the BJP’s political opponents, he said, “They are not sure if they will make it to opposition benches this time. Me or the BJP are not panicking, we will enjoy the election like a festival.”

To a question, he said let a grand temple of Lord Ram be built in Ayodhya, and then “we will build a grand memorial in the memory of those who were “martyred” for the Ram Janmabhoomi”.

Stressing that he is committed to the 25 crore people of the state, the chief minister said his goal has been to establish the rule of law without discrimination.

In an apparent reference to SP, Bahujan Samaj Party and Congress, he said they were like students who have never attended classes and are now nervous.

Speaking on the Covid situation, Adityanath said his government has made extensive and adequate arrangements to deal with the third wave of the pandemic.

There is no need to panic, he asserted.

He also spoke about the new law against those who try to destroy or burn public property, saying recovery will be made from such people.

People of Uttar Pradesh are waiting to bid goodbye to the BJP government on March 10 when votes will be counted, Samajwadi Party president Akhilesh Yadav said on Saturday welcoming the announcement of the assembly poll schedule for UP and four other states.

He also sought to assure that his party would abide by all the conditions laid down by the Election Commission to ensure Covid-safe polls in the state.

Yadav, however, appealed to the EC to ensure that regional parties also get proper space on digital platforms on which he alleged the BJP was dominating due to its governments in the Centre and UP and its vast financial resources.

He made a plea to the poll panel to assist resource-scared smaller parties infrastructurally to hold virtual rallies during the seven-phase of polling in the state.

“We welcome the announcement of dates for the UP polls. People of the state have been waiting for March 10 to say goodbye to the BJP,” Akhilesh said after the declaration of poll dates starting from February 10 and ending on March 7 in UP.

On being pointed out that the EC has banned the holding of physical rallies or other modes of the physical campaign till January 15 at least, he said the party would abide by the EC decisions effective till January 15 and also the ones that would be taken after it.

He, however, urged the EC to ensure a level-playing field for the regional parties on digital platforms on which he alleged “BJP hawi hai” (BJP is dominating) because of having the government at the Centre as well as the state and also due to their financial heft.

“The EC should ensure that regional parties also get space on national TV channels, regional channels and social media platforms during the election,” the SP chief said.

Asked if the SP was fearing that it would not be able to compete with the BJP on the digital platforms, Akhilesh asserted “SP is not weak.” It was the SP government which had distributed laptops to youths during its government in the state between 2012 and 2017.

Hitting out at the BJP, he said the “double engine” government merely spread “lies” all these five years in UP.

“They did nothing for farmers despite promising to double their income. The BJP will be wiped out in the state on March 10,” he said.

Going a step further, the SP claimed on Twitter that “after March 10 people will not have to pay for 300 units of electricity consumed and the bill will be zero up to this limit.”

The SP which lost to the BJP badly in 2017, has allied with the RLD and some caste-centric regional parties to defeat the saffron party in the 2022 polls.