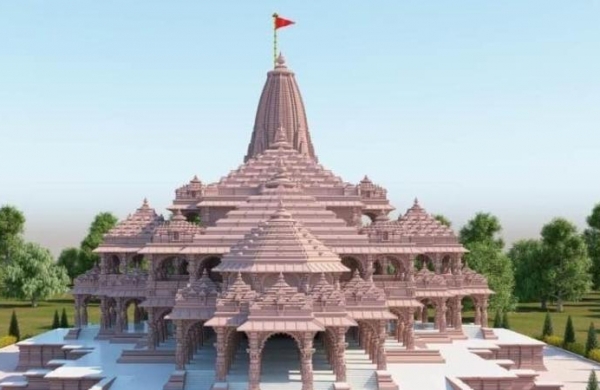 Express News Service
LUCKNOW: Responding to the applications from over a dozen foreign countries to construct their guest houses in Ayodhya, the Yogi Adityanath government has allowed nations with large Hindu populations to build their properties in the temple town to give a push to international religious tourism and put Ayodhya on the global tourism map.

About a dozen foreign countries have approached the state government showing their willingness to construct their guest houses in Ayodhya – the birthplace of Lord Rama and his abode. The countries which have applied with the proposal include Sri Lanka, Canada, Nepal, Suriname, Fiji, Kenya, Indonesia, Malaysia, Trinidad and Tobago, Mauritius, Thailand and Korea.

Notably, this concept is already there in Kushinagar which is a major destination of pilgrimage for the followers of Gautam Buddha. Most of the countries having their guest houses in Kushinagar are from the East Asian region. China, Japan, Korea, Sri Lanka and Thailand are the prominent ones. In Kushinagar, Gautam Buddha had accomplished complete salvation (mahaparinirvaan).

According to Ayodhya Municipal Commissioner Vishal Singh, 12 acres of land have already been earmarked for the purpose of building guest houses for visitors from foreign countries. “Any country can apply. We will make land available to them,” said the officer.

With almost all the states of the country wanting to build their guest houses also to facilitate the stay of pilgrims, about 1200 acres of land is being acquired in Barheta, Shahnawaz Pur Maza, and Tihura Majha villages adjoining Ayodhya to develop a grand New Ayodhya city.

The UP Awas Vikas Nigam has already issued notification for the acquisition of land in these three villages. Besides residential colonies, the New Ayodhya City will have five-star hotels, dharamshalas, muths, ashrams, Hindu temples of different states and guest houses and temples of foreign countries ensuring the holistic development of the temple town as one of the most prominent global destinations of religious tourism.

The New Ayodhya is being developed by the Yogi Adityanath government on the lines of Kushinagar to boost international religious tourism by building a Lord Rama Circuit and connecting it with Chitrakoot and other places visited by Lord Rama.