UP court to hear Somnath Bharti’s bail plea on Thursday 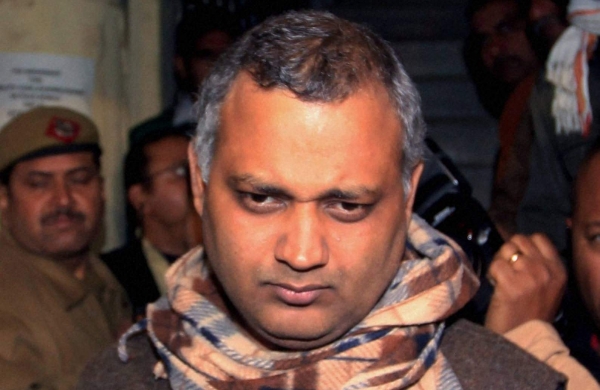 By PTI
SULTANPUR: The bail plea of senior Aam Aadmi Party leader and Delhi MLA Somnath Bharti, who was arrested in Uttar Pradesh for his alleged objectionable remarks, will be heard on Thursday.

During a hearing in a special MP-MLA court on Wednesday, government advocate Dan Bahadur Verma sought time from the court to obtain the criminal record of Bharti.

He said in the case pertaining to objectionable remarks registered at Jais police station in Rae Bareli, police served B-warrant, which is obtained from the court in order to take a jailed accused from one jail to another jail through journey, to Sultanpur jail and informed the court.

Bharti on Monday had ink hurled at him in Rae Bareli and was arrested later for allegedly making objectionable remarks last week.

He was remanded to 14 days in judicial custody at Amhat jail in Sultanpur district.

Minutes before his arrest, a youth hurled ink at the Delhi MLA when he was emerging from a guest house.

According to a purported video clip of his remarks on Saturday on the state’s medical facilities, the AAP MLA had said in Hindi, “Children are being born in hospitals, but they are of dogs.

” Shortly after ink was flung at him, Bharti was heard arguing with the policemen around him, telling them that he would strip them of their uniforms.

Bharti also retweeted a video clip in which he is heard using a derogatory term for Adityanath, while talking about “atrocities on women” in the state.

The Amethi Police arrested Bharti, a former Delhi minister, in Rae Bareli on Monday morning, on the basis of a complaint filed by BJP worker Somnath Sahu over the alleged remarks made last week.