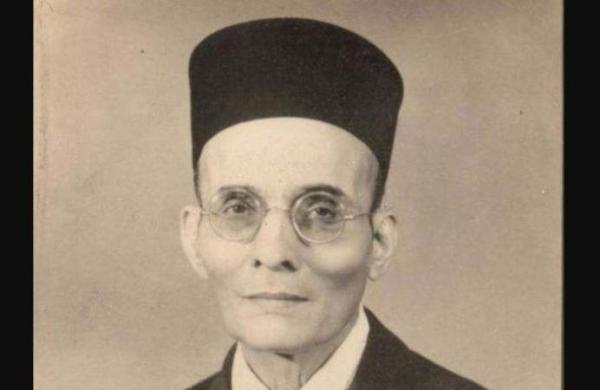 Express News Service
LUCKNOW: A portrait of Hindutva ideologue Veer Savarkar in the picture gallery of the Uttar Pradesh Legislative Council has sparked a row.

Congress MLA Deepak Singh wrote a letter to Vidhan Parishad chairman Ramesh Yadav seeking the removal of the photo saying it was an insult to the great freedom fighters of the country who made sacrifices to win the freedom withstanding the atrocities during the British Raj.

“The installation of Savarkar portrait is an insult to the freedom fighters who bore all kinds of torture but never bowed down before British,” Singh said in the letter to chairman Ramesh Yadav. The Congress MLC also demanded the Council chairman to get the portrait of Savarkar shifted to BJP’s parliamentary office on the premises of Vidhan Bhawan.

The MLC wrote: “Under your chairmanship, the UP government has renovated and beautified the Uttar Pradesh Legislative Council. I thank them for that but I request with great sorrow that it is an insult to the great freedom fighters to install a picture of Savarkar among the portraits of the freedom fighters andthe greatmen who gave their life for the country.

“What message would be conveyed to those who come to the picture gallery on a study trip. What will they learn?” asked the Congress MLC in his letter.

Earlier, on Tuesday, inaugurating the renovated picture gallery of the Vidhan Parishad, CM Yogi had unveiled Savarkar’s portrait saying the personality of Vir Savarkar was an inspiration for the countrymen.

While the right-wing organisations praise Savarkar calling him a great patriot and inspiration for his contribution to the freedom struggle, Congress tends to link him with the assassins of Mahatma Gandhi.

In a retort to the Congress MLC’s letter, state cabinet minister Siddharth Nath Singh called it Congress’ misfortune that its leaders and MLCs did not know the history. “They want to keep history confined to the family. History is very vast,” said the minister.

He added that Savarkar was one of those who wrote tales of valour for India. “Congress MLCs should know that Indira Gandhi had praised him. They should recall what she had said. Congress should stop insulting patriots whose names should have been included in history,” said Singh.

Meanwhile, Samajwadi Party chief Akhilesh Yadav said there should be a debate over the contributions made by people to the country’s freedom struggle. There are many against whom stories are in vogue raising a finger on their roles, said Akhilesh.

Earlier, the politics over Jinnah’s portrait had rocked Aligarh Muslim University (AMU) when the BJP MP from Aligarh had written to the university administration seeking removal of Mohammad Ali Jinnah’s portrait from the Student Union central Hall.