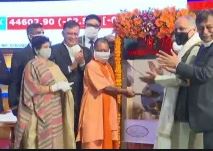 In COVID times, Lucknow Municipal Corporation will progress towards achieving the ‘Aatmanirbhar’ goal with the listing of municipal bonds worth Rs 200 crores. The Corporation is committed to improving the lives of the citizens living in its jurisdiction, said UP CM Yogi Adityanath.

“A new chapter will be written in the development history of UP, CM Shri @myogiadityanath Ji to ring the bell at @BSEIndia in Mumbai today for listing of bond of Lucknow Municipal Corporation. LMC’s bonds have witnessed an astounding oversubscription since it’s launch,” said Yogi Adityanath Office in a tweet.

On Tuesday, Bollywood actor Akshay Kumar called on Yogi Adityanath at a city hotel to discuss the immense possibilities of film shoots in the northern state.