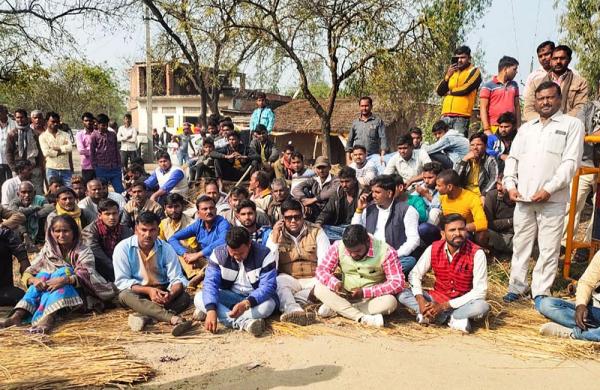 Express News Service
LUCKNOW:  Two persons were arrested by Unnao police on Friday evening in connection with the poisoning of three minor Dalit girls in Baburaha village of the district on Wednesday. One of them, according to police, was in love with one of the girls but she spurned him. Two of the poisoned girls died on way to hospital while the third one is battling for life in a Kanpur hospital.

Accused Vinay held in connectionwith the death of two girls in Unnao.Making the announcements about the arrests before the media, Laksmi Singh, IG, Lucknow Range, said Vinay (25) and a 15-year-old boy of a village adjoining Baburaha were arrested on the basis of surveillance and a tip-off received from a police informer. The IG claimed Vinay had accepted to have committed the crime.

IG Singh revealed that the accused was known to the girls. On the fateful day, while they were collecting fodder in the field, the duo approached them and offered snacks and water spiked with insecticide.Vinay revealed during his interrogation that he was frustrated as he had proposed to the girl on February 14 and had asked for her mobile number, but she refused to share it.

On Wednesday, Vinay, accompanied by the teenager, allegedly came prepared with his plan to poison the girl who had rebuffed his professions of love. The IG said that as per Vinay’s confession, he offered the spiked water only to the girl he loved but other two also snatched it from him and had it as they were thirsty. All the three girls started frothing as soon as they drank the insecticide-laced water.

During the interrogation, the accused told the police that he came to know the girl during the lockdown while both worked in their fields, which were adjacent. Earlier in the day, the last rites of the girls were performed amid tight security in the presence of the family and police and district administration officials. The bodies were brought to their village after the autopsy on Thursday.

The DM denied reports of any pressure being exerted on the family with regard to performing the last rites. Meanwhile, a team from Forensic Science Laboratory visited the village to collect more evidence. A team of nine officials recreated the crime scene at the spot and collected samples of froth from the girls’ clothes for chemical tests.