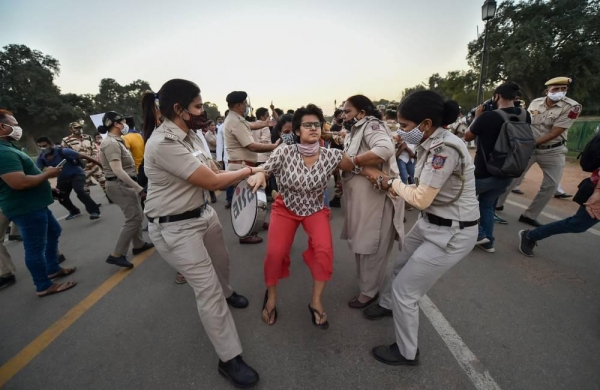 By PTI
NEW DELHI: The Delhi Police on Friday detained members of the Left-affiliated All India Students’ Association (AISA) protesting outside the Uttar Pradesh Bhawan here against the deaths of two girls whose bodies were found in a field in Unnao.

Three girls, aged 16, 15 and 14, were found in the field by the villagers when they did not return after leaving their house to take fodder for cattle, according to the UP police.

The villagers rushed the teenagers, who are related, to a hospital, where two of them were declared brought dead.

The third girl, who is on ventilator support at a Kanpur hospital, is being treated for suspected poisoning, the police said on Thursday, adding they have registered a murder case in connection with the deaths.

On Friday, the AISA held a protest demonstration outside the UP Bhawan against the alleged murder of the two teenagers.

The protesters demanded “immediate action against perpetrators of attack on Dalit women in Unnao” and medical attention to the third girl, who is on ventilator support.

“Ensure justice to the victims and survivor! Punish the perpetrators! Yogi Adityanath must resign,” the student association said in a statement.

The protesters were taken to Mandir Marg police station.