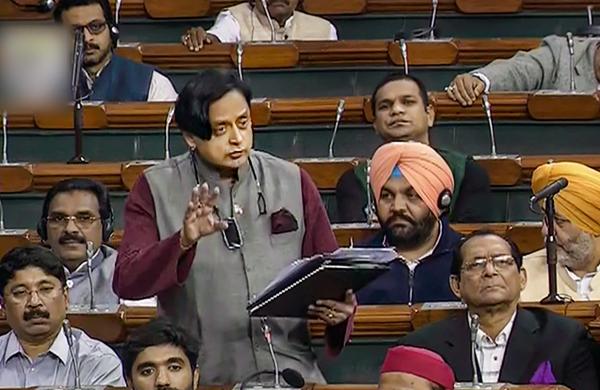 By PTI
NEW DELHI: Congress leader Shashi Tharoor on Tuesday said that university campuses, in the last few years, have no longer remained inclusive spaces that safeguard freedom of expression and individual liberties, and stressed on the need to replace narrow-minded identities with a willingness to embrace differences.

Initiating the discussion on demands for grants of the Education Ministry in Lok Sabha, he said the budget for the ministry is characterized by a “bizarre series of cuts” and any hope for positive development in the country’s primary and higher education ecosystem has been effectively handicapped by the allocations.

Tharoor also pointed out that the pandemic has exposed a serious digital divide and he cited instances of students taking their own lives due to lack of access to smartphones when classes moved online.

He also pitched for having a national computer curriculum.

“Whether it is JNU, Jamia Milia or Aligarh or so many others, in the last few years, our campuses have no longer remained inclusive spaces that safeguard freedom of expression and individual liberties.”

“Instead, there has been a systematic effort to alter the character of our colleges and universities through the imposition of a singular and dominating ideology. That is not just an assault on the soul of free, diverse and inclusive India,” he said.

Tharoor noted that narrow-minded identities need to be replaced by willingness to embrace differences.

He congratulated the education minister for rolling out the National Education Policy (NEP) but said the budget for the ministry has been characterised by a “bizarre series of cuts” and that allocations have betrayed expectations.

“Instead of allocations commensurate with the soaring ambitions of the NEP, there is a disconnect between the targets outlined in the NEP and the financial support any hopes for positive development in our primary and higher education ecosystem has been effectively handicapped by budget allocations,” Tharoor said.

According to him, there is an over bureaucratization of universities and that the higher education system is overregulated and under governed.

There should be a focus on a result-based system with emphasis on learning outcomes, he added.

Regarding the announcement in the latest Union Budget about setting up 100 new Sainik schools, the Congress leader said there is no information about funding and also flagged that many of the existing Sainik schools are facing severe financial distress and that some are on the verge of closure.

He challenged the government to set up at least ten new Sainik schools without renaming Jawahar Navodaya Vidayalayas Urging the education minister to ensure there is a discussion in Parliament on the NEP, Tharoor said, “This temple of democracy should not reduced to a notice board and just a budget counting exercise.”

Participating in the discussion, BJP member Sanjay Jaiswal praised the NEP and said it will change the wrong education being imparted to children in the past.

He wondered how many children will know about poet Kalidasa who many might know as the Shakespeare of the East.

Jaiswal also urged the government to do something with respect to coaching centres and to ensure that there are no coaching classes for engineering and medical examinations before a student completes tenth class.