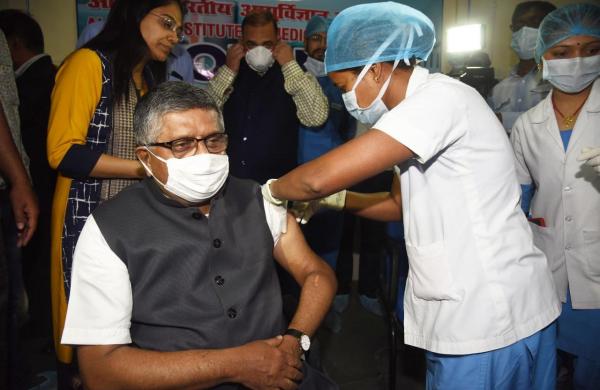 Sharing this here on Tuesday after taking the Covaxin at AIIMS, Patna-Sahib MP and union IT and Law minister Ravi Shankar Prasad said that all the ministers of the Union Cabinet have voluntarily taken a decision that they would not take the coronavirus vaccine for free and would would pay the fixed price of Rs. 250.

The Centre has fixed the price of Covaxin shots at Rs 250 while Bihar has made it free in all government hospitals and has shortlisted more than 50 private hospitals also. Prasad, however, made the payment of Rs 250 for the vaccine shot from his own pocket to the AIIMS voluntarily.

“According to the collective decision of all the Union Ministers, I have given donation of Rs 250 to the hospital, even though vaccine is being offered free of cost in Bihar”, he tweeted. The minister also had a review meeting with the director of AIIMS at Patna, principal health secretary of Bihar and other officials of hospitals prior to being inoculated. He promised to provide all help needed and appreciated the hospital’s efforts during the COVID-19.

“The doctors, nurses and supporting staff of AIIMS Patna had done good works during the COVID-19. I appeal to the people of Bihar to come forward for vaccination in large number to make it a mass movement”, he said.