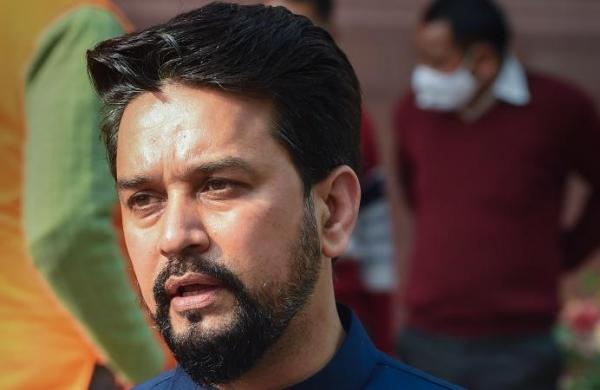 By PTI
NEW DELHI: Union Minister Anurag Thakur on Thursday kicked a row in Rajya Sabha when he sought to extrapolate usage of the term ‘andolanjivi’ by a Congress MP for Mahatma Gandhi, to ask if the Father of the Nation was a “shariantkari” (conspirator).

KC Venugopal of the Congress while participating in the discussion on Budget for 2021-22 referred to Prime Minister Narendra Modi’s comment of ‘andolanjivi’ for farmers protest.

Noting that the nation got freedom from the British through ‘andolans’ (protests), he said by that logic Mahatma Gandhi should have been the biggest ‘andolanjivi’.

Intervening in the debate soon after Venugopal finished speaking, Thakur said criticism is fine but “I had not expected that a Congress MP and office-bearer will call Mahatma Gandhi a shariantkari (conspirator). Nothing can be more unfortunate than that.”

They rushed into the well of the House demanding an apology from Thakur.

Bhubanesar Kalita, who was in the chair, said he will examine the records and will expunge any word that is unparliamentary.

But the Congress members were not satisfied and continued to protest.

Amid protests, Thakur, who is minister of state for finance, continued to make his statement saying the Budget for the fiscal year beginning April 1 is one for new India which has made higher provisions for departments such as social justice and empowerment and women and child development.

He went on to state that the Budget was for Aatmanirbhar Bharat which has been cheered by all as reflected in the stock market rising for days post its presentation.

Kalita asked Congress members to go back to their seats but they continued to protest.

He asked Thakur to conclude as the allocated time for the sitting of the House was getting over.

Thakur, who had begun speaking just a few minutes before the scheduled time was to end at 15.00 Hrs, ended and proceedings were adjourned for the day.