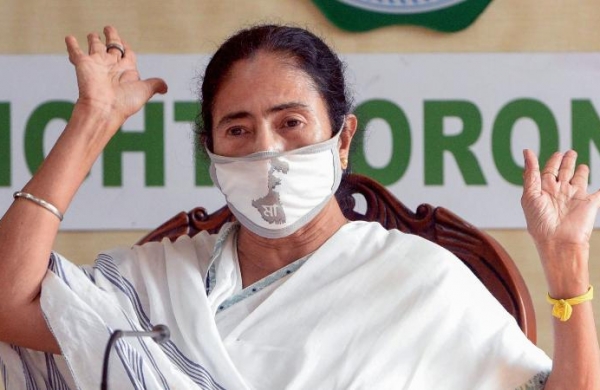 By PTI
SILIGURI: West Bengal Chief Minister Mamata Banerjee Monday slammed the union budget as “anti- people” aimed at deceiving the masses and said the BJP talks about nationalism, but in practice, they are the ones who are selling resources of the nation to the private players.

Reiterating the demand for withdrawal of new agri laws, Banerjee wondered why the Centre is hesitant to write off farm loans if it can waive NPAs running into crores of rupees.

“They (BJP) lecture others on nationalism, but in practice, they are the ones who sell the nation. They are selling everything from PSUs, Insurance, Railways to Ports. This is a budget to deceive the masses. It’s anti-farmer, anti-people and anti-country budget,” Banerjee said while addressing the inaugural ceremony of Uttar Banga Utsav here.

Speaking about agri infrastructure cess, Banerjee said, “They are now implementing a new cess. Revenues earned through cess are taken by the centre and not shared with the states”.

READ| Wisdom over poetic flourish: Sitharaman on the ball with India’s 100th budget

She said that regular increase in petrol and diesel prices and imposition of cess on these products have severely affected the poor people owing to the related price hike of essential commodities.

Taking a dig at the saffron party for sending a chartered plane to fly TMC leaders to Delhi for induction into the saffron camp, Banerjee mockingly said they do not have money to pay for the travel of migrant workers but have money to fly corrupt leaders in chartered aircraft.

“During COVID period we paid for transportation of migrant workers. But, they (BJP) have money for using chartered planes to fly corrupt leaders to New Delhi. This only shows their true colour,” she said, taking a swipe at the saffron party.

Maintaining that a Rs 3,200 crore project for north-south road connectivity between Siliguri and Kolkata in the state is already in progress, Banerjee said that when her government is already implementing it, what more is there for the central government to do.

The Union Finance minister announced Rs 25,000 crore for road construction in West Bengal in the budget, including upgradation of the existing Kolkata-Siliguri highway.

Banerjee asserted that the funds allocated for road development in poll-bound West Bengal should instead be given to the farmers.

“There is no need, I will do it on our own in the state. Don’t do such politics during elections,” she said.

Banerjee said that work on another road link is also on via Bardhaman and Rampurhat to connect north Bengal with the southern districts of the state.

She accused the centre of depriving West Bengal, saying that while Assam has been given opportunity for regional air connectivity, it has denied the same for existing airports in Coochbehar, Malda and Balurghat in the state.

“If you (central government) don’t start air services to these airports, I will do it,” she said.

The chief minister said that the budget proposal for disinvestment in the insurance sector will leave the general people uncertain about their future.

“They had promised Rs 15 lakh in your account, but in reality they will take away Rs 15 lakh from you and sell off the PSU insurance companies,” she said refering to Modi’s promise on bringing back black money swindled abroad.

She said that privatisation of central PSUs will lead to loss of job security of employees, while asserting that in her government, every job is safe.

Banerjee said that her Finance minister Amit Mitra has told her that the union budget is “disguised, camouflaged to deceive the people”.

She claimed only a chosen few close to BJP are being given control of all the businesses while others are suffering.

Banerjee claimed that the BJP leadership has reneged on its pre-Lok Sabha election promise of reopening seven tea gardens in north Bengal, while the centre has again announced a Rs 1,000 crore package for tea gardens in the budget.

Maintaining that the TMC government’s “Swasthya Sathi” health insurance programme is a success, she said, it is providing healthcare worth Rs 5 lakh to each family annually for 10 crore people of the state.

Exuding confidence of winning the assembly elections for a consecutive third term, Banerjee told the gathering, “don’t worry, Didi will stay and you will get everything”.

She claimed that Bengal has become the guiding star of India and the whole world is saying it is the future of the country.

“This is why I have demanded Kolkata to be made the capital of the country apart from three more in the country”,she said.

“We have done all development work. a lot of industries are coming to north Bengal,” she said, adding that to help students and youth of the state secure their future is her goal for the next five years.

“I am not ashamed to say that I have lost hands down in the Lok Sabha elections in north Bengal.

I urge you to come back this time and bless us,” she told the audience at the inauguration of the festival.

The BJP won seven out of eight seats in north Bengal in 2019 Lok Sabha elections, while one went to the Congress.

“I am astonished as to how such a vindictive government, which wants to sell off the country can talk of patriotism.

They are selling off the country and are talking of one nation, one leader,” she said.

She said that the centre has called for ‘one nation, one ration card’, but the West Bengal government could not fully implement it owing to COVID pandemic.

“We have done around 40 per cent of the work, but there has been some delay owing to COVID,” she said.