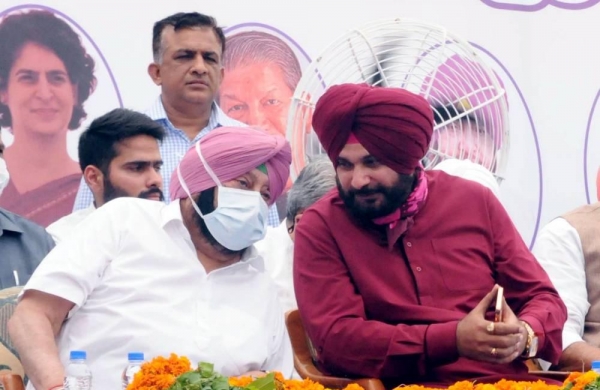 Even as the two tried to brush aside their differences and put up an united face in one photo frame, body language suggested they were not on the same page.

The 57-year-old Amritsar MLA was appointed the Punjab Congress chief, notwithstanding the strong opposition from Amarinder, who had earlier refused to meet Sidhu, citing his “derogatory” tweets against him.

Sidhu in a letter on Thursday requested the CM to come for the installation ceremony, calling him the “eldest of the Punjab Congress family” and saying he had “no personal agenda”.

Softening his stance, the chief minister invited party MLAs for tea at Punjab Bhawan ahead of the installation ceremony at the party headquarters here.

The day saw the rare sight of Amarinder and Sidhu sharing the table at high tea hosted for all MLAs at Punjab Bhawan.

Though Sidhu reached 10 minutes before the CM, he was not seen when Amarinder arrived. He appeared again after 20 minutes and sat in the opposite row before being asked to take the seat next to the CM for tea. He seemed to be avoiding eye contact with Amarinder.

Party leaders later termed it a cordial meeting between the two. This was the first time in nearly four months that Sidhu and the CM met each other.

While speaking from the dais at the main venue, the CM tried to draw Sidhu’s attention. “Listen Navjot”, he said as Sidhu was talking to someone.

The event was attended by Congress general secretary Harish Rawat, who is also the incharge of Punjab affairs at the AICC.

When Sidhu got up to speak displaying a cricket shot, he ignored Amarinder and touched the feet of former CM Rajinder Kaur Bhattal seated next to Amarinder and also of veteran leader Lal Singh. The CM looked on.

“I was commissioned in the army the year Sidhu was born. When my mother asked me to enter politics, Sidhu’s father helped me. I used to go to their house when he was six years old… We will work together for Punjab. Not just Punjab, India. We share a long border with Pakistan. Pakistan, China and now Taliban in Afghanistan, all of them are going to come and sit at the Kashmir and Punjab borders,” he said.

The CM added he has accepted the party’s decision.

“We have to think of Punjab’s welfare. When Sonia Gandhi told me that the party wants to make Sidhu the state unit chief, I told the media that whatever decision is taken will be acceptable to us.’’

“There is no difference between an ordinary worker of the party and its state unit chief. Every Congress worker in Punjab has become the state unit chief from today. I will work shoulder to shoulder with the CM. I have no ego. Congress is united.”

In his address, Sidhu said he has never hankered for any post and talked about giving up cabinet berth earlier.

Sidhu said the purpose of his presidentship is to resolve people’s issues.

The Congress is united and his aim is to work towards giving power back to people, Sidhu stressed.

Sidhu said for him major issues are that of farmers who are protesting for months against the Centre’s “black farm laws”, the issues pertaining to elementary teachers in the state, catching big fish involved in the drug racket and securing justice in desecration cases.

He said workers are the soul of the party, which derives power from them.

“All Congress workers in Punjab have become the party’s state unit chief today. There is no difference between a leader and a worker,” he said in an emotionally charged speech.

The cricketer-turned-politician said he will have love for juniors and respect for elders.

“Punjab will win, Punjabis will win,” he said.

While pointing towards Sidhu, Amarinder Singh said they will work together towards the state’s welfare.

“We will move together in politics. We have to think of Punjab’s welfare,” the CM said.

“And not just Punjab, we have responsibility for the country as our state shares a long border with Pakistan,” said Amarinder Singh, adding that the state faces threats and challenges of various nature with a hostile neighbour.

A two-minute silence was also held as a mark of respect for three party workers, who died in an accident early in the day in Moga district while coming to attend the function.

A video of Sidhu greeting the chief minister was circulating, in which he was heard saying, “How are you, sir?” The chief minister and the Amritsar (East) MLA were seen sitting next to each other at Punjab Bhawan and later at the party headquarters.

According to Congress MLA Pargat Singh, the meeting between Sidhu and the CM at Punjab Bhawan was “cordial”.

He said Sidhu met the chief minister over tea in the presence of Rawat.

This is the first time in nearly four months that Sidhu and Amarinder Singh have met each other.

The chief minister’s media adviser tweeted pictures of the two leaders having a conversation.

The CM had invited Congress leaders for tea at Punjab Bhawan before the installation ceremony.

Sidhu came from Patiala and went to Punjab Bhawan shortly before the CM’s arrival.

Ministers, Congress MLAs and other senior party leaders were also present at the two venues.

Sidhu and the chief minister were at loggerheads for some time, with the Amritsar MLA recently attacking the CM over desecration cases.

The CM had earlier had opposed Sidhu’s appointment as the state Congress chief and said he would not meet him until the cricketer-turned-politician apologises for his “derogatory” tweets against him.

Tensions between Singh and Sidhu flared up in April after the Punjab and Haryana High Court quashed a probe report on the 2015 Kotkapura police firing incident.

The Amritsar legislator had resigned as a state minister in 2019 after he was divested of his local bodies portfolio.

Sidhu had switched sides from the BJP to the Congress before the 2017 Assembly polls.

Rawat on Friday asked new PCC chief Navjot Singh Sidhu to take everyone along to pave the way for the party’s victory in the Assembly polls next year.

Speaking at the Sidhu’s installation ceremony at the party headquarters here, Rawat also told Chief Minister Amarinder Singh that the responsibility of ensuring that the Congress returns to power in the state lies on his shoulders.

Sidhu was appointed the Punjab Congress chief, notwithstanding the strong opposition from Amarinder Singh, who had earlier refused to meet the Amritsar MLA, citing his “derogatory” tweets against him.

Addressing party workers and leaders, Rawat said the tradition of the Congress is to take everyone along and stand with everyone.

The party high command has given you the responsibility of taking everyone along, he told Sidhu.

“When I am talking of taking everyone along, I mean taking common workers along,” he added.

“We have to make the Congress victorious in Punjab and Uttarakhand and pave the way for the formation of the party-led government at the Centre in 2024 under the leadership of Rahul Gandhi,” said Rawat.

Pointing towards Amarinder, who was sitting next to Sidhu, Rawat said he was in awe of his magnanimity.

“You are one such person whom we always look up to for inspiration. The way you fought for farmers’ rights and poor sections and the way you have taken steps for the welfare of various sections needs to be lauded,” he said.

“One thing I know is that a lion remains a lion, he never grows old. At heart, a lion remains a king,” Rawat said, stressing that he and Congress workers know that the CM will take everyone along and ensure the party’s victory.

About Sidhu, Rawat said he has the quality of mesmerising all and he is dedicated to Punjab as well as the party.

Earlier, interacting with reporters, several Congress MLAs said people have high expectations from the Congress, which is eyeing to return to power in the 2022 polls.

Pargat Singh said, “People have high expectations from us. Sidhu is my friend but at the same time we have to deliver. I have always done politics of issues.”

Sukhpal Khaira described Sidhu as a “charismatic and popular leader” and said people had high expectations from him.

“At the same time, Amarinderji is an experienced, farsighted and a visionary leader. We are happy that both leaders are on the same page and a positive message has gone out not only to Congress cadre but people of Punjab,” said Khaira.