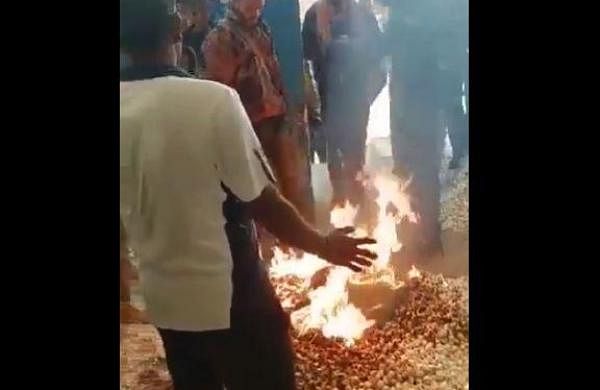 BHOPAL: Panic struck the Agriculture Produce Mandi in Mandsaur district of Madhya Pradesh on Saturday, after a young farmer allegedly set ablaze around one 60 kg garlic produce on not getting adequate price from wholesale traders during the open auction.

Fortunately, the alert Mandi staff and other farmers doused the fire promptly, preventing any further damage inside the premises.

The incident happened when a young farmer, identified as Shankar Sirfira, a native of Deoli area in Mahidpur town of Ujjain town didn’t get an adequate price for his garlic produce. Angered over it, he set ablaze his produce, triggering panic in the Mandsaur district Agriculture Produce Mandi. A video of the farmer shouting ‘Jai Jawan Jai Kisan’ slogan after setting ablaze the garlic produce has gone viral.

“I spent Rs 5,000 on transporting the garlic produce here, but was getting Rs 1100 only from the buyers. It was better to burn the produce, if it wasn’t worth getting proper price,” Shankar Sirfira said at the YD Nagar police station in Mandsaur district.

“I spent Rs 2.5 lakh on cultivating garlic this season, but have only got Rs One lakh in the market,” he said.

Importantly, garlic doesn’t figure in the list of crops, which are covered under the minimum support price (MSP) regime.

According to the secretary of the Mandaur Cooperative Agriculture Produce Mandi, Parbat Singh, since garlic isn’t covered by the MSP regime, it is sold by farmers in the Mandi through the open auction system to traders.

“Depending on the quality of the produce, the garlic at the ongoing open auction in the Mandi is fetching prices ranging between Rs 500 to Rs 6000 per quintal. If any farmer isn’t satisfied with the prices being offered here, that farmer is free to return and sell it anywhere else in the country. The concerned farmer from Deoli area of Ujjain district was getting Rs 1400 per quintal price for his around 60 kg produce, but unsatisfied with it, he set the produce ablaze. Fortunately the produce of other farmers remained safe due to timely action by alert Mandi staff and other farmers,” Singh said.

While confirming that the farmer Shankar Sirfira was brought to the police station for questioning , the YD Nagar police station in-charge Jitendra Pathak said, “since no damage was caused by the fire to produce of other farmers, hence no case has till now been lodged against the concerned farmer.”