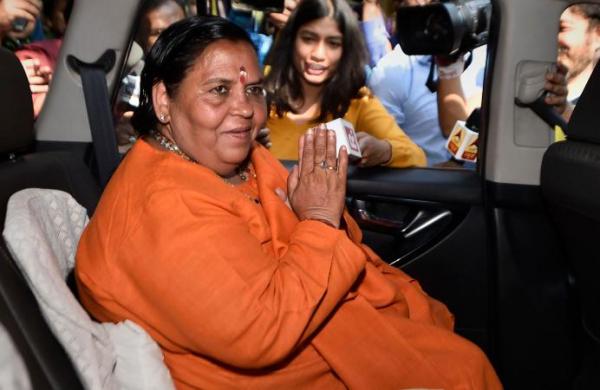 Express News Service
BHOPAL: Twelve days after demanding a total ban on liquor in all BJP-ruled states, former union minister and BJP leader Uma Bharti has announced that she will start a drive against alcohol and drugs across Madhya Pradesh from March 8 – the International Women’s Day.

And joining Bharti in the statewide drive against alcohol and drugs from March 8 will be Khushboo, a young woman from MP, who was with Bharti during her stay on the banks of river Ganga in Uttarakhand in 2020.

“I’ve found Khushboo, an ideal partner for the statewide campaign de-addiction drive. She is from MP only and had joined me during my Ganga-Prawas. Seeing her commitment and courage for sacred causes, I had named her Ganga Bharti during the Ganga Prawas only,” Bharti tweeted on Wednesday.

“Now I’ve asked Ganga (the young woman from MP) to prepare for launching the de-addiction campaign on March 8. She will tell you details about the campaign five days later,” Bharti tweeted.

The saffron-clad firebrand leader’s announcement to launch a statewide campaign against drugs and liquor is being touted as her first indication of a return to active politics.

Importantly, a few months back, Bharti had announced that she would return to electoral politics by contesting 2024 Lok Sabha polls. She had not contested the 2019 general elections citing health reasons.

Bharti who had served as CM from 2003 to a large part of 2005, had on January 22 demanded total ban on liquor in all BJP-ruled states in the wake of the poisonous liquor tragedy which killed 28 villagers in Morena district of MP.

The former MP CM’s announcement to launch statewide campaign against alcohol and drugs comes amid speculations about the Shivraj Singh Chouhan government planning to sell liquor online and change the excise policy to boost revenues.

Around a fortnight back, the ruling saffron party in MP had appeared in a divided house in the wake of the Morena hooch tragedy. While the home minister Narottam Mishra had advocated opening new licensed liquor vends near remote villages to check illicit liquor trade, the CM Shivraj Singh Chouhan had denied about possibility of opening of new liquor vends in the state. At the same time, Bharti had demanded total liquor prohibition in all BJP-ruled states, including MP.

Later, controversy erupted over the state’s excise commissioner sending letters to all district collectors, seeking proposals to open new liquor vends in their respective districts. With the opposition Congress accusing the BJP government of attempting to turn MP into a liquor state, the letter was withdrawn by the excise commissioner.