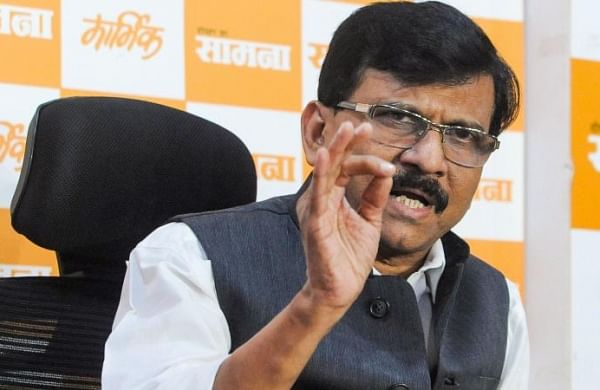 MUMBAI: The Shiv Sena on Tuesday pooh-poohed the Maharashtra BJP’s claim that the Maha Vikas Aghadi (MVA) government will soon collapse and asserted the three-party ruling alliance in the state will remain in power for 25 years.

Talking to reporters after a meeting with NCP president Sharad Pawar, Shiv Sena MP Sanjay Raut hit out at the BJP over the recent riots in Amravati and the ongoing strike by Maharashtra State Road Transport Corporation (MSRTC) employees.

The NCP is a key constituent of the Shiv Sena-led MVA government.

The Congress is the third partner in the coalition.

Taking a dig at state BJP president Chandrakant Patil for his reported comments that the MVA dispensation will soon collapse, Raut said he should wake up from slumber as the government will complete its second anniversary on November 28.

The Sena MP said the MVA government will last for 25 years and its power centre is where he is standing, a reference to Pawar’s residence.

“He (Patil) must be getting shocks after the early morning oath-taking ceremony. Chandrakant Patil has said this (predicting collapse of MVA) for nearly 28 times. The government will last for 25 years and I am standing near the power centre,” Raut said.

In a dramatic turn of events on November 23, 2019, BJP leader Devendra Fadnavis took oath as Maharashtra CM with NCP legislator Ajit Pawar as his deputy in the wee hours, but their government lasted just for around 80 hours.

The NCP president is considered the chief architect of the three-party alliance which assumed office on November 28, 2019.

Without naming the BJP, a former ally of the Sena, Raut hit out at the opposition party over the ongoing strike by MSRTC employees and the recent violence in Amravati in eastern Maharashtra.

“Everyone knows who is inciting the situation in Maharashtra and why it is being done, who is adding oil to the fire on the MSRTC issue, we have the information about this,” the Rajya Sabha MP said.

Attempts are being made to set fire in Maharashtra, from Amravati (a reference to the recent riots in the city) to MSRTC workers strike, Raut alleged.

BJP MP Vinay Sahasrabuddhe on Tuesday said the Maha Vikas Aghadi, which is set to complete two years in power in Maharashtra later this month, has failed on all fronts and people were distressed.

“There has been an increase in violence against women, and the government is no longer talking about a bill they were planning to bring to curb it. It has forgotten ST (state transport) workers. Farmers have not got crop insurance or relief from the state government,” he alleged.

All India Majlis-e-Ittehadul Muslimeen president Asaduddin Owaisi on Tuesday said the Shiv Sena was a communal party and the so-called secular parties like the Congress and NCP had joined hands with the Uddhav Thackeray-led outfit to grab power in Maharashtra.

In the process, Owaisi, who was addressing a party convention in Solapur, said the Muslim community had got a slap on the face from the Congress and NCP.

“I want to ask all those Muslims who became the victims of the lies of the NCP and Congress if they have an answer to my question. Will you be able to answer yourself that the parties you supported brought the Sena to power,” he asked.

The Shiv Sena, like the BJP, was and would remain communal, Owaisi said, adding that “the Majlis, Muslims, Dalits or those who believe in secular values” do not need any certificate on secularism from such parties.

Attacking Rahul Gandhi and Pawar, Owaisi said the two leaders ask Muslims to not vote for AIMIM, but had themselves aligned with the Sena to safeguard power, properties and families.

“Is it not true that CM Thackeray, standing in the Assembly, spoke about temple and masjid. Do you (NCP and Congress ) not feel ashamed when your CM says that we (Shiv Sena ) demolished Babri Masjid,” he said, and appealed to the Muslims to not believe the NCP and Congress anymore and to use their vote wisely.