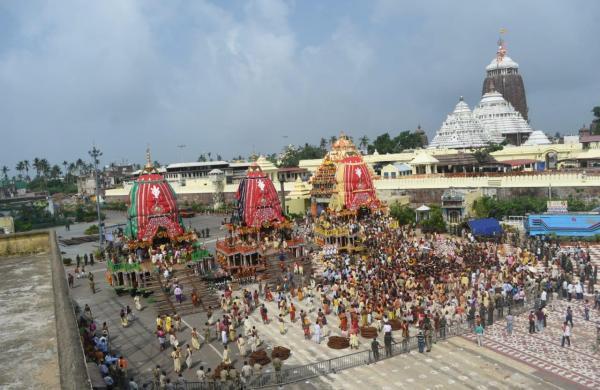 By PTI
KOLKATA: Organising committees of two prominent Rath Yatras in West Bengal have called off festivities and decided to keep it a low-key affair within the temple premises in the wake of the pandemic situation.

This is the second year that the Rath Yatra will be held without any fanfare on July 12.

Organisers of the 625-year-old Mahesh Rath Yatra in Hooghly district have decided not to take out the chariots of Lord Jagannath and his divine siblings Lord Balabhadra and Subhadra Devi which are pulled by devotees along the Grand Trunk Road during the annual car festival.

Instead, rituals will be conducted within the premises of the permanent Jagannath Temple and a makeshift camp adjacent to it.

Piyal Adhikary, Working Secretary and Sevayat of the Jagannath Temple Committee, Mahesh, told PTI Tuesday, the deities will be brought from the sanctum sanctorum to the adjacent makeshift ‘Masir Bari’ (aunts house) on the Rath Yatra day and kept there for a week till the day of the return car festival (Ultorath) on July 19.

During Rath Yatra, the deities go to their aunts house (Masir Bari), stay there for a week and then return to the main temple on the occasion of ultorath.

Adhikary said a ‘salgramshila’ ( a particular type of stone considered sacred by Hindus) will be taken along the one-km-long route of the Rath Yatra and kept at Masir Bari.

It will be brought back to the temple compound on the day of Ultorath.

“An estimated 5-6 lakh people congregate during Rath Yatra at Mahesh. We are sad that we cannot celebrate the occasion in a befitting manner due to the pandemic. But we cannot take a chance of spreading the virus when it has been contained to a great extent,” Adhikary said.

He said devotees will be allowed to have darshan (view) of the idols at the structure next to the temple, that too from a distance and by following Covid-19 protocols.

The International Society For Krishna Consciousness (ISKON) Kolkata has decided to do away with special plans on Rath Yatra in its Golden jubilee year.

“All our preparations since 2015 to hold the Rathyatra on Red Road, with a flying hanuman model following the chariot in air, invite devotees and dignitaries from abroad have come to nought,” Radharaman Das said on behalf of ISKON, Kolkata.

Like last year, rituals will be conducted inside its Albert Road temple premises in south Kolkata.

“While the deities will be taken around the temple compound as a symbolic yatra and all rituals will be performed, we also have plans to take the idols in a car and not in a chariot to a place on nearby Gurusaday Road, erect a small pandal there, and place the deities there for the devotees.

“But everything depends on the pandemic situation at that time and instructions of the government,” Das said.