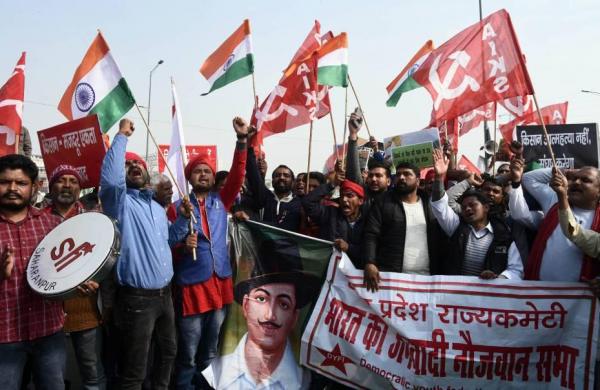 By Express News Service
NEW DELHI: The government has sent a notice to Twitter, directing the microblogging site to comply with its order to remove contents and accounts related to farmer genocide hashtags. If Twitter did not comply with action, it may face penal action, according to sources.

Earlier, Twitter had blocked around 250 accounts, following an order from the Ministry of Electronics and IT. According to sources, Twitter had unilaterally unblocked accounts and tweets despite the specific order.

Twitter cannot justify non-compliance as it was an “intermediary” and was obliged to “obey” direction of government, sources added.

The government notice also quoted over half a dozen Supreme Court judgments including of constitutional benches as to what is public order and what the rights of authorities are.

The MeiTY had directed Twitter to block accounts on the request of the MHA and law enforcement agencies to prevent any “escalation of law and order” in view of the ongoing farmer agitation, according to an earlier order.

Twitter had temporarily suspended the accounts citing it was in response to a “legal demand”.

However, the account holders had said there was no intimation from Twitter before the accounts were blocked.

“Incitement to genocide is a grave threat to public order and therefore the Ministry of Electronics and I-T ordered for blocking of these accounts and tweets under Section 6A of the I-T Act,” said the order, adding that several accounts were using the hashtag of ModiPlanningFarmerGenocide, and were making “fake and provocative” tweets.

In a strongly-worded notice to Twitter, the Ministry of Electronics and Information Technology said it had on January 31 asked the micro-blogging site to block 257 URLs (web addresses) and one hashtag under the relevant provision of the law as they were “spreading misinformation about (farmer) protests and has the potential to lead to imminent violence affecting public order situation in the country.”

“Twitter chose to sit over the request for one full day before blocking them, only to unblock them a few hours later.  This was not taken kindly by the government and a fresh order/notice has been issued to Twitter to comply, failing which penal action under sections that provide for fine and jail up to 7 years has been warned,” sources with direct knowledge of the development said.

Section 69A of the Information Technology Act gives the central government powers to direct an intermediary like Twitter to “block for access for the public any information generated, transmitted, received, stored or hosted” in any computer if it is “satisfied that the same is necessary or expedient in order to prevent incitement” of any offence, the notice said.

The accounts that were blocked – and then restored – included those of news magazine Caravan, Kisan Ekta Morcha, tribal leader Hansraj Meena, and actor Sushant Singh.

According to Twitter, it held meetings with government officials and conveyed that the accounts and posts in question constitute free speech and are newsworthy.

The company then “unwithheld” the accounts to protect public conversation.

The other accounts that were initially withheld included those of CPM politician Mohd Salim, farm organisation BKU Ekta Ugrahan and Tractor2Twitter.

The move was criticised by politicians and civil rights activists.

On Twitter’s plea of such blocking impacting freedom of speech, the notice said Twitter has no constitutional, statutory or any legal basis to comment upon the interplay of statutory provisions with constitutional principles.

“The direction to block the hashtag ‘#ModiPlanningFarmerGenocide’ has been found to be instigating people to commit cognizable offences in relation to public order and security of the state,” it said adding the impracticability or disproportionality of the said measure cannot be decided by an intermediary which is bound by the orders of the central government.

It sought banning of the hashtag accompanied by the content that is attached to it by the users using the same.

“Apart from the fact that the hashtag itself is provocative, the assertion of Twitter in its letter dated February 1, 2021, that stock phrases and exaggerations/crude emotional appeals do not constitute inflammatory speech in light of the judgments of the Supreme Court, is meritless as the content attached to the said hashtag has been found to be directly falling afoul” to law, it said.

The ministry said a committee that reviewed the January 31 order and the reply by Twitter a day later, has confirmed the decision to block the said handles and hashtag.

“After the hearing was concluded on February 1 also the interim order continued to remain in operation despite which you chose not to comply with the mandate of law and the order passed by the competent authority legally endowed with the jurisdiction to pass the same.

“Instead, you chose to send a communication dated 1.2. 2021 received by the undersigned on 1.2.2021 at 19.37, attempting to give justification, thereby not only admitting that you have not complied with the order, but also seeking to justify non-compliance,” it said.

It went on to state that Twitter cannot assume the role of a court.

Having considered Twitter’s response, “the competent authority is satisfied that it is necessary and also expedient in the interest of public order and also for preventing incitement to the commission of any cognizable offence relating to public order that Twitter. is once again directed to block for access by the public, the said Twitter handles and also the said hashtag with immediate effect,” the notice said giving details of the handles to be blocked.

Failure to do so would invoke Section 69A[3] for specific penal consequences, it added.

Section 69A(3) in The Information Technology Act, 2000 provides that “the intermediary who fails to comply with the direction issued under sub-section (1) shall be punished with an imprisonment for a term which may extend to seven years and shall also be liable to fine.