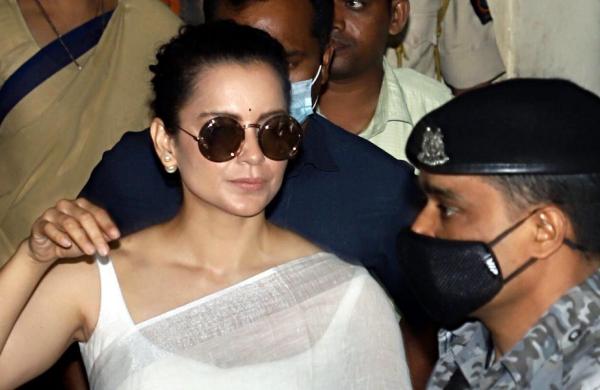 Express News Service
BHOPAL: Demanding an apology from Kangana Ranaut over her “anti-farmer” tweet, Congress workers on Friday evening staged protests at Sarani town of MP where the actress is shooting for Bollywood flick ‘Dhaakad’.

Led by Betul legislator Nilay Daga and district Congress president Sunil Sharma, the party activists tried to march to the coal handling plant of the Satpura Thermal Power Station but were stopped by the police around 200 meters away.

Kangana has been shooting at the same coal handling plant premises for the last few days along with Arjun Rampal and others for ‘Dhaakad’, which is slated for October 2021 release.

With the Congress activists hell-bent on entering into the coal handling plant premises, the police first used water cannon to disperse the protestors. But when the activists started scuffling with the cops, they used force to push them back.

Later, Congress gave a 48-hour ultimatum to the actress to apologise within for her last week’s tweet failing which the protest would intensify. Last week, the actress had attacked the Barbadian pop singer Rihanna for extending support to the ongoing farmers’ agitation. While responding to Rihanna’s tweet, Kangana had tweeted dubbing the protesting farmers as “terrorists.”

However, Kangana was camping at a resort in Churna in the Satpura Tiger Reserve (around 25 km from Sarani town), while the protests were going on at Sarani.

Earlier on Thursday evening, the Betul District Congress president Sunil Sharma had announced to hold the protests in Sarani town, demanding an apology from Kangana for her controversial tweet. On the same day, the actress tweeted, “Mujhe netagiri mein koi interest nahin… magar lagta hai Congress mujhe neta banakar hi choragi (I don’t have any interest in politics, but it seems Congress is determined to make me a politician).”

The police security cover had been tightened around the Coal Handling Plant in Sarani in the wake of Congress’s threats to stall the shooting of the flick starring Kangana, who was granted Y-plus security cover by the central government in September 2020. The Centre’s move came after she claimed a threat to her life in the wake of her statements about the presence of an alleged drug nexus in Bollywood.