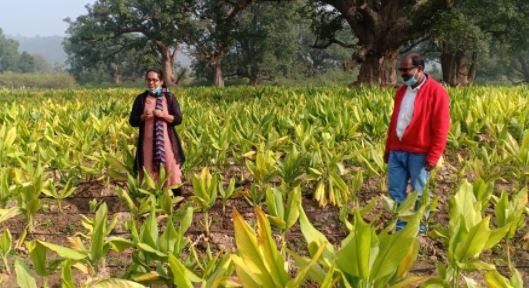 The weather in Korea district is good for valuable crops like turmeric, its commercial production will create new opportunities for economic growth for the Gothan committees in the coming times. The views of the utterances were expressed by the Chief Executive Officer of the District Panchayat, Tulika Prajapati after observing the turmeric crop near Gowthan in Podi Gram Panchayat. On Monday, Alsubah District Panchayat CEO Tulika Prajapati visited several village panchayats under Sonhat Janpad Panchayat and inspected the Gothans. Here he inspected the turmeric crop closely with the officials of Krishi Vigyan Kendra and interacted with local farmers. It is to be noted that under the Suraji village scheme, to strengthen the rural economy, agro-based works are being taken forward with special importance in the Gouthan villages. In the same sequence, cash crop turmeric has been sown on a large scale to increase the income of committees that run various Gothans in Korea district. Along with this, farmers groups in Gothan villages have also been linked to this massive project. Therefore, under the supervision of scientists of Krishi Vigyan Kendra, an initiative has been taken to plant turmeric crop in an area of ​​about 50 acres. Turmeric crops have also been planted among the fruits and it has been increased under drip irrigation scheme. Going to the Gram Panchayats of Sonhat district to observe the crop, the CEO interacted with the local people about the production of this crop.
During the visit of Gram Panchayat Podi and CIO District Panchayat in Kusha, the farmers who are looking after turmeric crop told that this time the condition of crops is very good. Tribal farmers who plant it along with Gothan committees are expected to get good financial benefits. After discussing with the villagers, the Zilla Panchayat CEO told that in the Gotthan villages, the government farms selected by the Gowthan committees in Sorga, Jampani, Kodimar Chharchha, Rojhi, Kushah and Amhar respectively, as well as in the farmers’ collective enclosures in the village Umzhar, Dudhaniya, Barbaspur etc. Turmeric crop has also been planted.