TSR vs TSR: War of words between former CM Trivendra and new CM Tirath in Uttarakhand 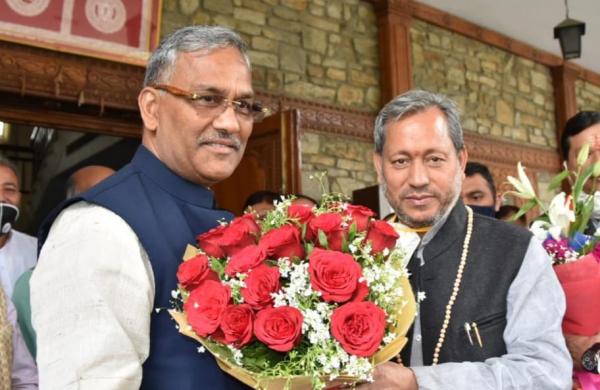 Ajay Dahundhiyal, a political commentator from Dehradun said, “The new CM said that the cases were registered against people who were trying to help others. Now this statement seems clearly directed at the former CM who just evicted office. Everyone can see that this is war of words between two political rivals.”

“As Mahakumbh is on the Covid threat will be taken seriously. The vaccination programme is successfully being implementated under visionary leadership of Prime Minister Narendra Modi,” said Trivendra Singh Rawat said on Monday during his visit in Haridwar.

This statement of Trivendra Singh Rawat comes after reversal of decisions of Trivendra government including withdrawl of over 5000 case registered Epidemic Act 1897 and the Disaster Management Act 2005 against people in Covid induced lockdown, RTPCR test for Covid to attend Mahakumbh, efforts to downplay the religious congregation and various other decisions has been reversed by Tirath Singh Rawat led government, Trivendra Singh Rawat today said that Mahakumbh should be taken seriously in terms of Covid 19.

The CM on Monday directed to start 500 extra buses for Mahakumbh which is exact opposite what happened in Trivendra led government.

The senior officials went ahead to write to various state governments not to run any special trains or buses for Mahakumbh 2021.

Om Prakash, Chief Secretary, Uttarakhand in January 2021  wrote a letter to the Chief Secretaries of all the states stating, “The states have to check and not allow sick passengers to proceed to the mela.”

Interestingly, the state government had also requested the railways to not run any special trains for Kumbh so that the number of visitors to the two-month long event is limited.

Analysts say that former CMs statement is direct comment on reversal of his decisions regarding Mahakumbh which was cut short due to Covid 19 epidemic.

Rahul Shekhawat, a political analyst based in Dehradun said, “Tirath Singh Rawat has set the agenda straight. His first instruction as the CM of the state was to shower flowers on Mahakumbh devotees during Shahi Snan (Royal Bath) of Mahashivaratri. The restrictions imposed by Trivendra government in the religious congregation caused anger among the BJP cadre itself, leave aside the vote base.”

The experts also pointed out that Tirath government is trying to cater to angry BJP cadre and base votebank of the BJP.

“The Mahakumbh is not just limited to Uttarakhand. It’s an event which happens every 12-years anunifying factor for devotees from across the country. By imposing such strict restrictions on travelling to the religious event hurt a lot of sentiments nationwide. Tirath Singh Rawat has one job- damage control, to assuage anger of the voters as well as the cadre,” said Yogesh Kumar, another political analyst from Dehradun.

Meanwhile on Monday, the CM reviewed the preparations of Char Dham Yatra and directed all preparations to be completed till April 30.

“Instructions jave been issued to secretaries of all concerned departments to clear all hassles and make sure that all arrangements are in place. Char Dham Yatra is a matter of devotion for devotees from across the world. We want to ensure that no issues are after by pilgrims travelling to Char Dham of Uttarakhand, ” said CM Tirath Singh Rawat after meeting with the key officials of the state.