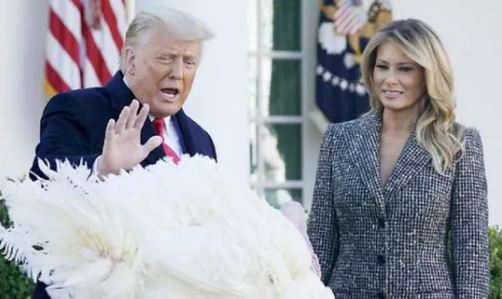 On November 24, US President Donald Trump spared the life of a National Thanksgiving Turkey as he issued a ‘pardon’ to the fowl in an annual Presidential holiday tradition that dates as far back as the 1940s. In the Rose Garden Tuesday, US President and the first lady Melania Trump pardoned an Iowa bird named Corn that superseded its counterpart named Cob from the Presidential Flock of turkeys. The bird was chosen following unusual polls ran by the White House on Twitter, asking, which of the two fowls be spared in the myth filled tradition that will restore the ‘sense of normalcy’.

“Ladies and gentleman, the president of the United States and Mrs. Trump,” an announcer introduced as the ceremony commenced. Taking part in the event alongside his wife in White House Rose Garden, US President wished the Americans a Happy Thanksgiving as he offered a reprieve to Corn from among 30 turkeys raised by Walcott turkey producers Ron and Susie Kardel. The two birds were presented to the US President by the National Turkey Federation. As Trump forbade Corn from being slaughtered during the festivities, both the turkeys are reported to retire at a new home at the campus of Iowa State University. Meanwhile, refraining from the political jokes, Trump said, “Thanksgiving is a very special day for turkeys, Thank you, Corn.” He then proceeded with the bashing of his former defense secretary Jim Mattis.