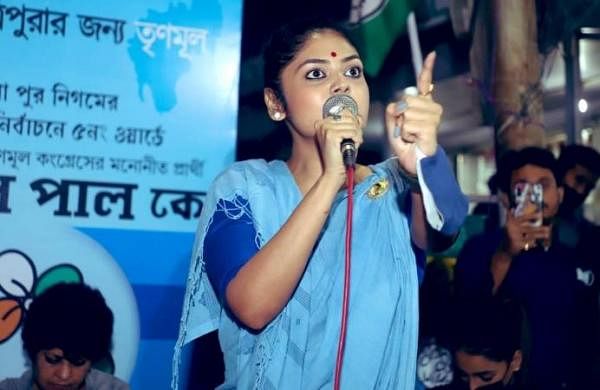 GUWAHATI: A Tripura court on Monday granted bail to Trinamool Congress (TMC) youth leader and actress Saayoni Ghosh after observing that the charges levelled against her by the police had no substance.

She was booked on Sunday under IPC sections 307 (attempt to murder), 153 (wantonly giving provocation with intent to cause riot), 153A (promoting enmity between different groups on grounds of religion, race, place of birth, residence, language, etc) and 120B (criminal conspiracy).

Following the hearing, the West District and Sessions Court said there was nothing on record that the act of the accused was to promote any ill-will or hatred between two groups to prima facie make out an offence under section 153A of IPC.

“On close reading of the forwarding report and the case diary, the following comments ‘kill them, cancel the Mukhya Mantri Sabha, Khela Hobe’, even if the allegation of killing them as said by the accused is true and correct, such words appear to be irresponsible comments,” the court said.

The term Khela Hobe is a slogan/phrase/catchphrase of the TMC and uttering such words is a part of the political campaign when the municipal election is in process, it said.

Saayoni’s lawyer Sankar Lodh said the court granted bail on a surety of Rs 20,000. The court said the actress, who was released, will have to appear before the investigating officer if called.

“Our submission was that there were no ingredients of offence for the non-bailable sections of 307 and 153A to be slapped against her. The court accepted our submission,” advocate Lodh said.

He said during the hearing, the prosecution had failed to place any medical report of injury when the court asked for it.

“The court asked the prosecution if it collected any medical report. The prosecution said the case is at a very early stage. Treatment is going on,” the advocate said.

The TMC was jubilant. The Tripura police stand exposed to some extent, party leader and MP, Sushmita Dev said.

On Sunday, Additional Superintendent of Police (Urban) of West Tripura district, B Jagadeswar Reddy had told journalists: “She (Saayoni) was arrested based on a complaint. The allegation against her is that she is trying to promote enmity between groups of people. We also got preliminary evidence of an attempt to murder. It is related to driving (in Agartala), so we arrested her.”

But he did neither elaborate the criminal conspiracy nor the case of an attempt to murder. He did not mention the name of the complainant either. The police officer had said efforts were being made to arrest four others who were travelling in a car along with Saayoni.

The TMC claimed the actress was targeted for saying “Khela Hobe”.

“She was in a car (in Agartala) and addressing her, a person said ‘didi, Khela Hobe. She replied yes, Khela Hobe. This is the reason why she was arrested,” TMC leader Kunal Ghosh said.

Saayoni apparently made the comment at a place close to the venue of Chief Minister Biplab Kumar Deb’s meeting.

Ghosh attributed the arrest of the actress and attacks at a police station besides at the residence of party’s Tripura leader Subal Bhowmik, allegedly by ruling BJP “goons”, to the party’s fear about defeat in the November 25 civic elections.

“Saayoni was arrested because she said Khela Hobe. PM Narendra Modi and his ministers also shouted this slogan in Bengal. So, should they be not arrested then?” Banerjee argued.

He said the TMC had filed over 100 FIRs against elements following attacks on its workers but none was even called to police station and questioned, let alone arrest them.

“After the TMC’s entry into Tripura, they (BJP) got rattled. I challenge Biplab babu (Chief Minister Biplab Kumar Deb), that if you keep taking away people’s democratic rights, I will defeat you in the Supreme Court. I will drag you (to the court). If I fail to do so, my name is not Abhishek Banerjee,” the TMC leader said.

He said the TMC was submitting the video evidence of the attacks in Tripura on its workers to the Supreme Court. He alleged the BJP had unleashed a reign of terror in the state and was sparing none.

“Journalists, advocates, patients in hospitals, doctors and policemen are all being attacked. There is no law and order. If you (CM) are so angry with me, blow up my car. Why are you attacking people?” Banerjee said.

He said the police denied permission to him for his roadshow in Agartala on Monday on the grounds of “political tension and the breakdown of law and order”.

The TMC alleged the attack at the East Agartala Women Police Station on Sunday was carried out by BJP “goons”. The incident occurred while Saayoni was being interrogated. Several people, including journalists from Tripura and West Bengal, were injured.