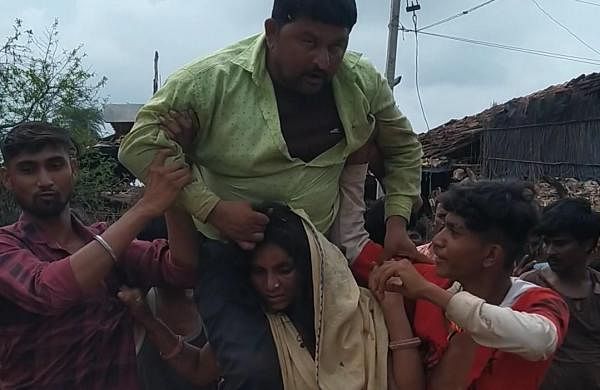 The second incident of a tribal woman being subjected to savagery was reported within two days in Madhya Pradesh.

A 38-year-old Sahria tribe woman was allegedly set ablaze by OBC men over a land row in Guna district on Saturday. A day later, around 250 km away in Dewas district, a 32-year-old married tribal woman was subjected to horrific torture in her own village by youths and men, including her husband, over an alleged extra-marital affair with a six years younger man.

The woman was pulled through her hair by youths and men in full public glare and then semi-stripped, before being flogged with a leather belt.

Later, the mother of three kids, was compelled to parade across the village with her husband on her shoulders, as tribal punishment for having an extra-marital love affair. More insult was in store for the helpless woman, as she and her alleged paramour were subsequently forced to wear garlands of slippers and parade around the village.

While the savagery continued in the presence of the woman’s kids and other children and women in the Borpadav village, youths and men cheered the cruelty and filmed the entire savage act.

The viral videos of the incident also showed a youth asking the woman’s alleged paramour to pay Rs 5 lakh to settle the matter, while the duo walk around the village with the garland of slippers.

According to the Dewas district police superintendent Dr Shivdayal Singh, someone reported the matter to the Dial-100 emergency service, after which, on-duty constable Shrawan Kumar rushed to the village and single-handedly saved the duo and escorted them back in the Dial-100 vehicle to safety.

“A case was subsequently lodged on the complaint of the man accompanying the woman (her alleged paramour) under different IPC Sections, including 354, 354-A, 354-D and all the 12 accused, including the woman’s husband were arrested in the next few hours,” the SP-Dewas maintained.

The Dewas district police superintendent also said that the brave constable who managed to save the woman and her alleged paramour from further cruelty will be incentivised.

According to sources, the concerned woman was in love with a man six years younger than her, around six months. She went missing on June 24, after which her husband lodged a missing person complaint with local police. She was found at her alleged paramour’s house on Sunday, after which the horror unfolded between her and the paramour.

Meanwhile, the National Commission for Women (NCW), while taking cognisance of the setting ablaze of the tribal woman over a land row in Guna district, has sought registration of an FIR and arrest of all accused. Action has also been sought against the erring officials, who failed to take swift cognisance in the matter. So far 5 persons have been arrested in the Guna district case.

Hitting out at the Shivraj Singh Chouhan government over the two incidents, the state Congress chief in a tweet, questioned why the crime against tribals was not stopping in the state. “You (Shivraj Singh Chouhan) keep on doing drama in the name of tribal welfare, but these incidents expose the actual condition of tribals, particularly women.”