Triangular contest in Bengal; there is strong undercurrent against TMC, BJP: Congress’ Hariprasad 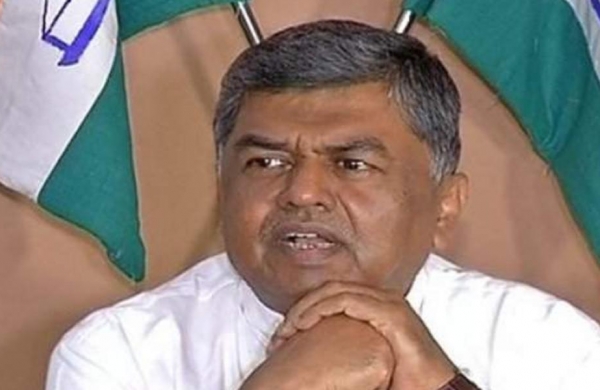 By PTI
NEW DELHI: A triangular contest is playing out in the West Bengal Assembly polls and the results will spring a surprise with a strong undercurrent against both the TMC and the BJP and in favour of the Left-Congress-ISF alliance, senior Congress leader B K Hariprasad said on Tuesday.

Hariprasad, who is overseeing the Congress’ campaign management for the West Bengal polls as a senior observer, also dismissed claims that the party is not fighting the election with all its might, saying this was a “disinformation campaign of the Nagpur university” people, a reference to the RSS.

In a telephonic interview with PTI, he said all Congress leaders, as well as workers, were on the ground in West Bengal and former party chief Rahul Gandhi would be campaigning in the upcoming phases of polls.

His remarks come a day before Rahul Gandhi is expected to campaign for the West Bengal polls for the first time.

Asked if the Congress would be willing to support the TMC after the polls if a situation arises that the two parties need to come together to stop the BJP from coming to power, Hariprasad dismissed it as a “hypothetical” question but added the elected MLAs and the Pradesh Congress Committee will recommend what they want and finally, the Congress president will decide.

Asked about the electoral contest turning out to be a Mamata Banerjee-led Trinamool Congress (TMC) versus the BJP contest, he said this was only a media perception created by the kind of resources the two parties had and their “marketing” tactics.

“The Communists and the Congress, along with new entrant ISF, have a formidable (Samyukta Morcha) alliance and the people have realised that they made a mistake in 2016 (assembly polls) and 2019 (Lok Sabha polls). It is a triangular fight and fascinating results will be there,” he said, exuding confidence of a good showing by the Samyukta Morcha in the polls.

Hariprasad, who has taken on additional responsibilities of AICC in-charge of the state after Jitin Prasada tested positive for COVID-19, said Bengal is altogether a different state with greater political awareness.

Both the TMC and the BJP are “disturbed” and, therefore, have gone into a high voltage campaign while not talking about real issues, he alleged.

It is one month into the campaign and those issues have not been talked about.

If they have the guts they should speak about that,” Hariprasad said.

There is an undercurrent against the BJP and TMC as none of them came to the rescue of the poor and migrants, he claimed.

Asked about Rahul Gandhi not campaigning in the state till now, Hariprasad said Gandhi was busy with other four assembly elections with the Congress contesting more seats in states like Kerala and Assam.

“Here we are fighting in 92 seats. Another four phases are there and we will fight it out. Rahul ji is also coming. He will campaign (going forward),” he said.

Asserting that a triangular fight between the Samyukta Morcha of the Left-Congress-ISF alliance, the TMC and the BJP was at play in West Bengal, he said a “surprise result” was in store for everyone, alluding to a strong performance by the Samyukta Morcha.

Hitting out at the BJP over its campaign, the Congress leader alleged that Prime Minister Modi and Home Minister Shah had brought “disgrace” to their respective positions by the kind of language they have used in the polls.

“Both TMC and BJP have gone so low in their campaign, it is unimaginable,” he added. Hariprasad said people have realised the mistakes made in the past and they will throw the TMC and the BJP out.

He asserted that the West Bengal elections were about the “asmita (pride)” of the Bengalis.

“It is the question of the asmita of Bengalis. Asmita of Rabindranath Tagore, Subhas Chandra Bose, Swami Vivekananda, Bidhan Chandra Roy and M N Roy.

These two people (Modi and Shah) are speaking against the Constitution. Bengalis are very intellectual and this fakelogy will not work,” he said.

Hariprasad also said the AIMIM will also not be a factor in the polls.

“It is a politically vibrant state and the people will give a befitting reply to those who have harassed them in the name of caste, religion and language,” he said.

Elections for the 294 assembly seats in West Bengal are being held in eight phases.

The votes will be counted on May 2.

As many as 45 Assembly segments will go to polls in the fifth phase which is scheduled for April 17.